Hearn: GGG Should Fight on DAZN In March or April, Then Canelo

Eddie Hearn realizes Gennady Golovkin is a star in his own right, one well within his right to carefully explore his options.

If the British promoter were guiding Golovkin’s career, though, he would advise the former middleweight champion to sign with DAZN. Partnering with that new streaming service would lead to the most profitable, meaningful fights that can be made for the 36-year-old Kazakhstan native.

“You don’t wanna be saying to people like Golovkin, ‘You better sign with DAZN. Otherwise, you’re not gonna get the Canelo fight,’ ” Hearn told BoxingScene.com before an open workout Wednesday in Manchester, England, to promote the Oleksandr Usyk-Tony Bellew fight Saturday night. “But, if he wants to fight Canelo, it’s going to be on DAZN. He’s got an 11-fight deal, but Golovkin deserves respect. And he also feels like he won that fight [their rematch]. So the aim, if I was Golovkin, would be to have a fight in March or April on DAZN, and then fight Canelo. It’s the biggest fight out there for both guys, so I think we want a third fight. It was great to watch.” 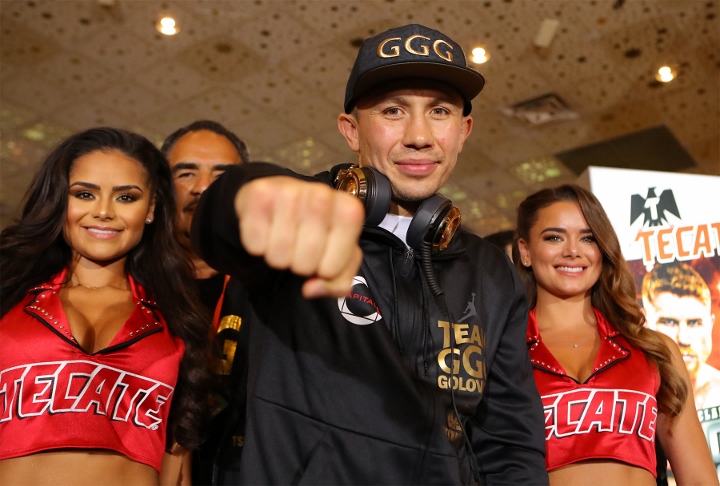 A third fight makes the most monetary sense for both boxers, but Golovkin is still considering offers from multiple platforms now that HBO has announced it won’t broadcast boxing after 2018. Alvarez signed a five-year, 11-fight deal with DAZN last month that could become worth as much as $365 million.

Now that the 28-year-old Alvarez’s fights will be streamed live on DAZN, not via pay-per-view, Golovkin is seriously considering partnering with DAZN to ensure a third fight versus Alvarez. The WBA/WBC middleweight champion is scheduled to make his DAZN debut December 15, when he’ll move up from middleweight to super middleweight to challenge WBA world 168-pound champ Rocky Fielding (27-1, 15 KOs).

Hearn’s company, Matchroom Sport, promotes Fielding, who’s a huge underdog against Alvarez. If Alvarez defeats Fielding, Hearn hopes one of his other fighters, IBF middleweight champ Daniel Jacobs, is afforded the opportunity to knock off Alvarez before Golovkin gets that third crack at him.

“Canelo’s got to beat Rocky Fielding first in December,” Hearn said. “He’s with us as well. We’re co-promoting that fight with Golden Boy. But in May, if he did get through that [Fielding] fight and he dropped back down to middleweight, we want the Danny Jacobs fight. You know, Jacobs-Canelo nearly happened before Canelo-Triple-G II.

“And that’s the fight I’m very confident will get made for Cinco de Mayo [weekend]. Obviously, ultimately it’s up to Canelo and Golden Boy [Promotions]. But that’s the fight. Both guys are available. Both guys are, you know, working together with the promotional companies. And it’s a great, great fight, and it’s a unification fight.”

[QUOTE=Jab jab boom;19262064]charlo shouldn't have to fight anyone else to get a shot at the wbc mw title. He already became mandatory and hasn't lost. So ggg should go to the back of the line and Canelo should stop f*king…

[QUOTE=aboutfkntime;19261976]that is old news..... are you new to boxing ? the WBC just mandated that Golovkin fight an eliminator with Charlo to determine who gets the Canelo payday but Golovkin punked out, again Charlo should get that fight by default…

[QUOTE=DaBeastO;19261972]the same way al gaymon pimped out gayweather jr to get other fighters to sign with him.[/QUOTE] Difference is Haymon was actually Floyd’s manager. Canelo is not signed to Hearn retard. Gayweather? Gaymon? What are you 10yrs old weirdo? Hearn…

[QUOTE=Jab jab boom;19261839]because wbc said winner of charlo vs centeno would be mandatory. So he's the mandatory and #1 contender. New to boxing?[/QUOTE] that is old news..... are you new to boxing ? the WBC just mandated that Golovkin fight…