Hearn Discusses The Status of Anthony Joshua vs. Kubrat Pulev

On Monday, promoter Eddie Hearn officially postponed all of his planned events in the month of May - due to the ongoing coronavirus pandemic.

Two of the cards pushed back, Dillina Whyte vs. Alexander Povetkin on May 2 and Oleksandr Usyk vs. Derek Chisora on May 23, were Sky Sports Box Office pay-per-views.

Now Hearn is wondering whether or not his planned fights for June will go forward - with the biggest being the return of IBF, IBO, WBO, WBA heavyweight champion Anthony Joshua, who faces mandatory challenger Kubrat Pulev, at the Tottenham Hotspur Stadium on June 20. 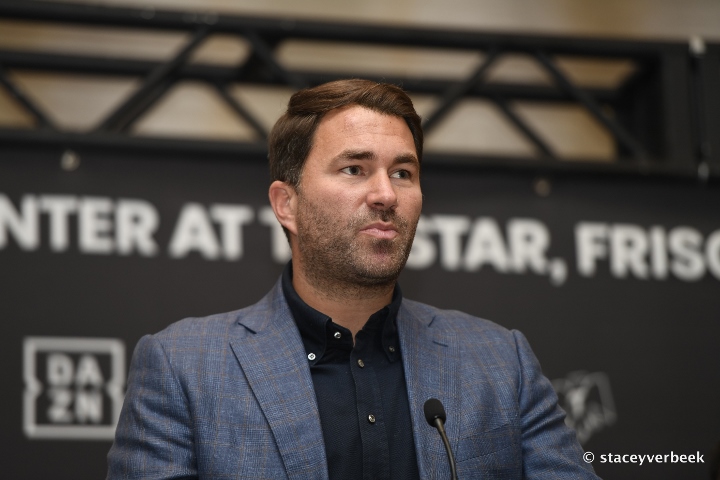 Hearn already has a contingency plan in place, with staging Joshua-Pulev at the same stadium on July 25.

But the fight could very well get delayed beyond the month of July.

“We have looked at alternative dates for everything without knowing anything concrete,” Hearn told Talk Sport.

“We have ongoing conversations with Tottenham to say that if the Premier League extends and does get played in June then we’ll be pushed back. We do have a date of July 25 held at Spurs as well, which is more realistic. It is five weeks after June 20. But we haven’t gone on sale with that, we haven’t made an official announcement in terms of seat details and on-sale dates, so we have got less pressure on that.

“There is more pressure for Anthony to fight twice this year. I know there is a bigger picture going on but everybody in sport, everybody in business right now, needs to be working on a solution.

"The outcome, what happens when we get through this because it is going to be a horrifically messy time for all businesses, all sports, everything, when we do come out the other side. The world won’t be the same again and, in a lot of cases, we will have to start from scratch.”

Someone should tell Hearn that It mustn't be in England

I agree with Eddie Hearns, this Pandemic can cancel July dates. :grr: