Hearn: Canelo or Golovkin is The Legacy Fight For Callum Smith

He captured his world title with a knockout win over George Groves, and at the same time won the World Boxing Super Series final.

Smith returns on Saturday night, when he defends his belt against Hassan N'Dam at Madison Square Garden in New York City. The contest is part of the Anthony Joshua vs. Andy Ruiz undercard. 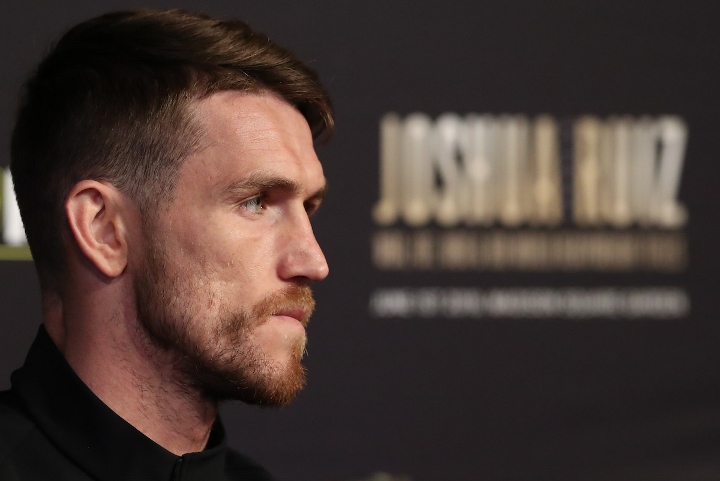 According to Smith's promoter, Eddie Hearn, there are two potential legacy fights for his man - which would come against Mexican superstar Saul 'Canelo' Alvarez or dangerous puncher Gennady Golovkin.

Canelo has expressed interest in the idea of coming over to the UK to face Smith at Wembley Stadium in London.

"The great thing for Smith is that Canelo is calling out his name, normally it would be the other way around," Hearn said to Sky Sports.

"Once you win a world title and once you defend it and maybe unify, that's when you need legacy fights. The legacy fight for Smith is Canelo or even GGG. They have the potential to move up to 168lbs and those fights could fill any arena or the stadium in the UK.

"Wherever Canelo says it's on, we're going. Wembley is attractive to Canelo, he has mentioned that quite a bit. It's likely though that Canelo fights GGG in September. I want to get Callum out again quickly if he wins, at home in Liverpool in September, then try another defence in December, raising the profile and then we go for broke next year."

Smith is very motivated for his upcoming fight, because he wants to make a very big statement for the American market.

"There are a lot of massive fights out there for me potentially, especially in the USA. A big performance puts my name out there to a different audience. N'Dam is a good fighter, a former world champion, it's a massive opportunity for him. The best version of me beats any version of N'Dam, I believe I can beat anyone at 12st. Walking to a ring as world champion will be special, but it all disappears if I slip up here, that's the motivation," Smith said.

Does anyone here have the same feeling as me, that Hearn keeps piggyback riding off of Canelo's name, he surely can keep Canelo's balls out of his mouth.:love::grumble:

One fight does not create a legacy..especially with 2 men that are naturally smaller..

WOW!!! Just looked at this and guys like this are ranked.... and NO! This is NOT Mike Tyson Punch-Out Mate Kis Lerrone Richards [B]Aidos[/B] Yerbossynuly Vincent Feigen[B]butz[/B] Vladimir Sishkin Bilal Akkawy Julio Alamos

No way triple cheap fights Smith, he’s gonna wait out another Canelo lottery ticket by fighting red lobster servers, bums under the bridge, and bin collectors! Canelo on the other hand has proven he wants to test his skills against…