Hearn: Andrade Still Wants To Fight Saunders At Some Point

The former WBA/WBO 154-pound champion really wanted to win the WBO middleweight crown from Billy Joe Saunders. That’s why Andrade didn’t hesitate to take that mandated championship match against the unbeaten British southpaw, rather than accepting a tune-up in what will be his first fight in almost exactly a year Saturday night. 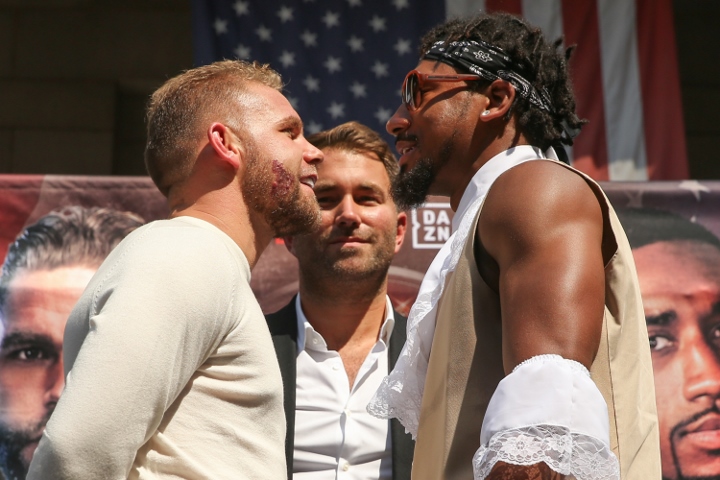 Even if the Providence, Rhode Island, native defeats Kautondowka in their 12-round, 160-pound title bout at TD Garden in Boston, Hearn thinks Andrade (25-0, 16 KOs) still will want to fight Saunders.

“Yeah, down the line, we’d love it,” Hearn said. “Andrade wants that fight. He’ll always be – if he wins on Saturday, it’s gonna be tough – but everyone will say, ‘Oh, you know, it wasn’t Saunders.’ So that will stick with him and he will wanna fight Saunders at some point.”

WBO president Francisco “Paco” Valcarcel told BoxingScene.com last week that Saunders (26-0, 12 KOs) won’t be eligible for his organization’s middleweight rankings for at least six months because he failed a performance-enhancing drug test late in August. The Massachusetts State Athletic Commission declined Saunders’ license application for the Andrade fight at a meeting October 9 in Boston because Saunders violated his agreement with the Voluntary Anti-Doping Association by testing positive for oxilofrine, a banned stimulant.

Frank Warren, Saunders’ promoter, has stated Saunders will appeal the Massachusetts commission’s decision all the way to the U.S. Supreme Court. Warren feels Saunders should’ve been allowed to box against Andrade because, according to its regulations, Massachusetts is legally obligated to adhere to the World Anti-Doping Agency’s standards.

The former champion should be free to fight in the United Kingdom as soon as Warren can schedule another fight for him. In addition to losing the WBO 160-pound championship, failing VADA’s test cost Saunders’ side a package of $2.3 million for facing Andrade in a DAZN main event.