The three-fight telecast will be headlined by the 12 round bout between WBC 115-pound titleholder Srisaket Sor Rungvisai (43-4-1, 39 knockouts) and Roman 'Chocolatito' Gonzalez (46-1, 38 KOs). The fight is a rematch from their March 18 clash in New York City, a fight that Sor Rungvisai won by controversial decision over Gonzalez. 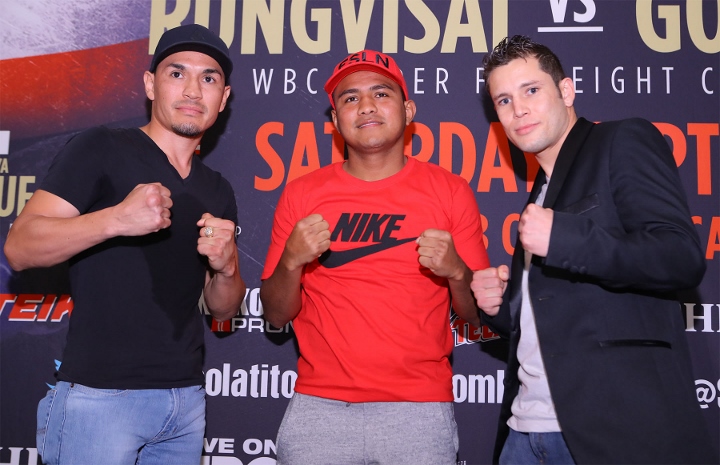 Inoue will be making his U.S. debut.

Peter Nelson, the executive vice president of HBO Sports, believes the highly-anticipated fight card could exceed the high expectations boxing fans have on the action the card could deliver.

"All (six) fighters are going to be hungry because there's a lot at stake," Nelson told BoxingScene.com in a recent interview. "All of them have a lot to prove."

"All three bouts are 50-50 fights and it is anyone's guess (who will win each fight). So to have three fights that will go any direction, where after the fights are over, you can mix and match these fighters in any way and come out with great fights.

The Sept. 9 card will be the first of three consecutive weekends of programming on HBO networks. The following weekend, Canelo Alvarez (49-1-1, 34 KOs) will face Gennady Golovkin (37-0, 33 KOs) in a 12 round middleweight bout at the T-Mobile Arena in Las Vegas. HBO Pay-Per-View will broadcast the card.

Earlier this year, HBO was criticized for not broadcasting enough regular HBO telecasts. There was also the fallout between HBO and Top Rank, which negotiated a deal to have ESPN broadcast their fight cards.

With money that would have been earmarked for Top Rank now free to be used by other promoters, HBO could purchase more quality fight cards to broadcast later this year and in 2018.

Not only is Nelson satisfied with the programming for this month, but for what could be broadcast in the immediate future.

"To have this card on Sept. 9 be the appetizer for Sept. 16, the best fight that can possibly be made in boxing with Canelo (Alvarez) and (Gennady) Golovkin, where fans have been dying to see this fight for the last two years, are now going to get what they're asking for."

"It's a great privilege for the network to be involved with the athletes of this caliber."

The Inoue fight is not 50/50. The others are more competitive.

How is Antonio Nieves who has a win, loss, and draw in his last three fights considered even with Inoue???? WTF?

Saying Inoue fight is 50/50 is just plain wrong (dare I say 'fake news' ??). Sure anything can happen, but the betting odds tell the real story that Nieves is 10/1 against and Inoue the strong favourite.

this man is a liar