Joshua has apparently slimmed down, after some critics feeling that he was too muscular for the fight with Ruiz. 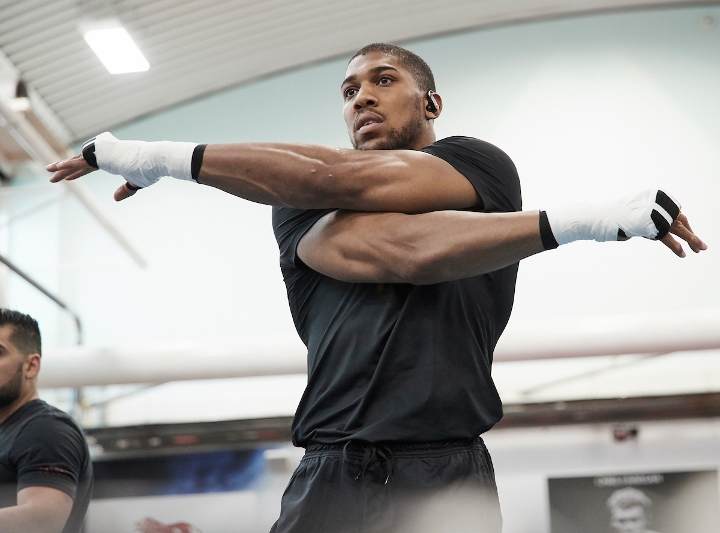 Ruiz dropped Joshua four times to secure a seventh round stoppage back on June 1 at Madison Square Garden in New York City.

Haye was advised by Chisora that Joshua was quick on his feet and still punching hard with less muscle.

Haye and Chisora are very interested observers. Because the winner of that rematch will have to make a mandatory defense against Oleksandr Usyk. But some believe the winner will vacate the belt in search of a bigger opportunity - which in turn could see Chisora face Usyk for the vacant belt.

"Dereck is impressed with Joshua," Haye said to The Mirror. "He found him not just in great shape but having trimmed down to the lean muscle, which is what he needed to do if he is to keep out of danger by boxing Ruiz at long range.

"And although he's taken off the over-muscle, he's still punching damn hard as well as being quick on his feet. Apparently AJ is fully focused and right back into his boxing.

"The sparring with AJ went well for Dereck also. We're all hoping Joshua does it in Riyadh but whoever wins will want a unification fight against WBC champ Deontay Wilder. So it looks as if either he or Ruiz will have to many mandatory defences ordered that he will have to vacate the WBO title.

"With Dereck coming off two big KO wins I am asking the WBO to put him in against their No 1 contender Oleksandr Usyk for their belt early next year. They know we will pack out the O2."

[QUOTE=Tecnoworld;20182328]Kownacki, as you correctly stated, is not dubbed "prospect", yet is very avoided by the champs. Yoka has destroyed Wallisch and dimitrenko, both of those decent fighters, plus he's gold medal at 2016 olympics. Unfortunately he's French and is not…

[QUOTE=Laligalaliga;20181826]All the guys you mentioned are still tagged prospect aside kowanski. Why do you think they deserve title shot than Derek war chisora? Lemme me see your reasons.[/QUOTE] Kownacki, as you correctly stated, is not dubbed "prospect", yet is very…

[QUOTE=Tecnoworld;20181679]Nope. You're wrong but...believe what you like best.[/QUOTE] All the guys you mentioned are still tagged prospect aside kowanski. Why do you think they deserve title shot than Derek war chisora? Lemme me see your reasons.