David Haye believes that Joe Joyce has to change his mindset and tighten up his defence if he is going to beat Daniel Dubois on Saturday night.

Haye, the former WBA heavyweight champion, signed Joyce to his promotional company when he turned professional after winning silver at the Rio Olympics.  In that time he saw him spar many times, but his disregard for the other fighter’s power he says will catch up with him, although he hopes that returning to train with Ismael Salas will make a difference.

“The only weakness I saw was that he didn’t seem to mind getting hit,” Haye said. “He gave everyone a very tough spar. The only person I saw have any real success against him was Lawrence Okolie, who is a quick, fast cruiserweight who can box well inside. Others he was able to walk down. It is hard to put a dent in him when he has a headguard and big gloves.  I am hoping that bringing in Salas has meant he has got moving more.” 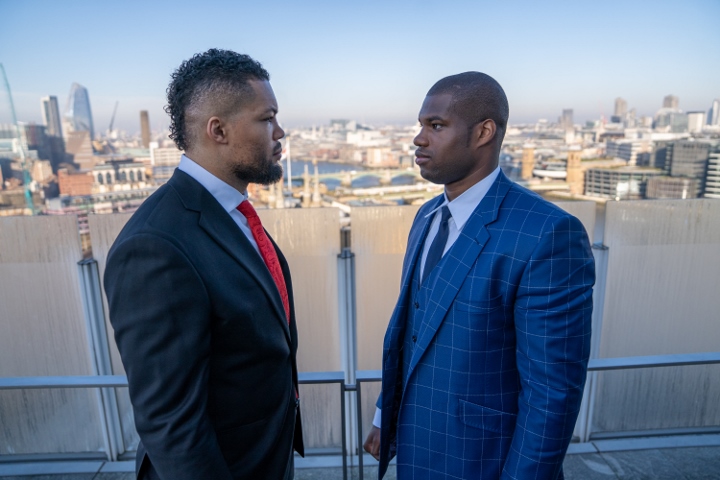 Haye believes the two unbeaten heavyweights will serve up a thriller when they clash at Church House, Westminster, on Saturday.

“It’s a perfect clash of styles for the fans to see two rough, tough heavyweights punching the life out of each other,” Haye said.

“Neither are known for their punch evasion. You don’t look at either and think ‘what a great defence’. They’ve both been tagged, they’ve both been hurt and they have both come back to win.

“Of the two, Dubois’s defence is a bit better, he keeps his hands higher. Joe has shown a disregard to punches coming at him. He relies on his punch resistance, which is all well and good until you fight someone who is 23 and a knockout specialist.

“Joyce has to take the mindset away from ‘take two or three to land mine’. That works against a certain opposition but when you start moving up the rankings and face fighters like Dubois, who has knocked almost everyone out.

“If you are fighting someone like that you need to be careful.”

However, Haye believes Joyce’s team have seen something in Dubois that makes them confident of victory, so much so that they were willing to take a sizeable pay cut for the fight to happen behind closed doors.

“This is the perfect opportunity for Joe Joyce to gate crash the top five in the division,” Haye said.

“This will push him towards the top of the pile if he wins. His team are very confident. They see something in Dubois they can capitalise on.”

He believes, though, that Joyce’s age, meant he had no real option but to accept the fight.

“Joe Joyce had to take it, he's at the age of 35 and he couldn't wait another 18 months to make it move,” Haye said. “If the move isn't made now he might miss the boat, it might get to the point where he is too old and it won't happen.”

“At a time when fights are being made on shorter notice than I have ever seen, even mega fights are being made on a few weeks’ notice. It is a time when you have to take every opportunity. We are in a place where fighters have to make tough decisions, decision they may not have made a year ago. When you get an opportunity to prove yourself and you believe in yourself, it’s a no-brainer.

“You might only get 60 percent of what you would have got last year, but it gets you to where you want to go. In this case that could be a fight with [Oleksandr] Usyk, either for a vacant world title or a final eliminator. That’s the same for both fighters, but they are willing to get a smaller fee to then get the big one.

“Dubois is young, but he has been boxing since he was nine years old, so he is the more natural boxer. Dubois is very natural the way he puts his punches together. Joe is not as smooth and as quick. It’s his athleticism and his engine that gets him over the line.”

When you have old legs and your mobility not that great anyway, I would say try and get lucky early because fighting a young strong puncher what happens if he continues to develop and get stronger as the fight goes…

[QUOTE=Tecnoworld;20909749]Imho joyce wins this, but dubois will still make it past the fight and be great in a couple of years. Simply he's much younger. Ps this is going to be the most exciting hw fight since wilder-fury ii. Much…

Imho joyce wins this, but dubois will still make it past the fight and be great in a couple of years. Simply he's much younger. Ps this is going to be the most exciting hw fight since wilder-fury ii. Much…