Long before Tyson Fury, there was only one Ricky Hatton.

As the unbeaten heavyweight from England makes his Las Vegas debut this weekend, he made sure consult the former two-division titlist regarding the best way to acclimate to the boxing capital of the world.

“He asked me the length of time I went over for my Vegas fights,” Hatton (45-3, 32KOs) said of the undefeated former lineal heavyweight champion, whom faces Germany’s Tom Schwarz at MGM Grand in Las Vegas (Saturday, ESPN+, 10:00pm ET). 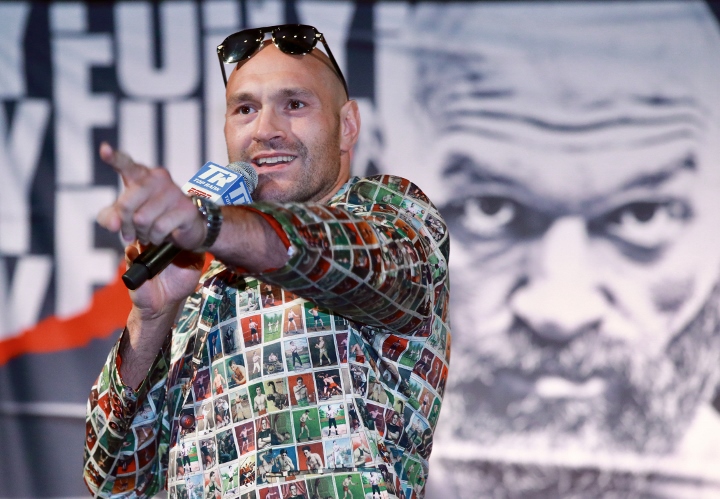 Hatton has played Sin City five times in his memorable career, all coming in a 29-month span between Jan. 2007 and May 2009. The bulk of his career had been spent in his native England, including his 11th round stoppage of Kostya Tszyu to win the World super lightweight championship in June 2005.

The bout came at a later than normal start time (1:00am local time) to accommodate United States premium cable outlet Showtime whom carried the event live as close to primetime as possible. Hatton properly altered his sleep schedule to get his body used to feeling refreshed in the late night hours; Tszyu failed to do so, feeling the full effects in the later rounds as he was battered into submission—and retirement.

Hatton nearly made a similar mistake in his second title defense, traveling to Vegas for the first time in a 12-round win over Juan Urango in Jan. 2007. He arrived in town barely a week ahead of fight night and entered a bit out of sorts despite getting the job done.

By the time he played the town for the fifth and final time in a crushing 2nd round knockout loss to Manny Pacquiao in May ’09, the exiting 140-pound king still never got it quite right.

“For the first one, I went over ten days before, but I felt it wasn’t enough, “Hatton noted in a recent interview with US-Bookies.com. “For the Pacquiao fight I went over for eight weeks and felt it was too long.

“So I said bang in the middle, about four to five weeks should be perfect.”

Fury (27-0-1, 19KOs) heeded the advice, setting up camp in mid-May both to adjust to the new surroundings as well as interact with his adoring public. The bout is his second straight in the U.S., having fought to a 12-round draw with unbeaten heavyweight titlist Deontay Wilder last December in Los Angeles, Calf., which carries a completely different climate and altitude than is the case in Las Vegas,

“The air is very dry (in Las Vegas) and you are expected to perform in that,” Hatton stated. “I told (Fury) to stay out of the casinos, because originally I stayed at Caesars Palace for about two weeks and my nose set like concrete from all the air conditioning.

“So he has got an apartment and instead of air conditioning he has bought a load of fans. It makes me feel proud when the (former) lineal heavyweight champion of the world is asking me my opinion. He’s taken the advice and Ben Davison tells me things are going very well.”

Hatton went 3-2 during his five-fight trek to Las Vegas. The losses came to the two best boxers of his generation, suffering a 10th round stoppage defeat versus Floyd Mayweather in their iconic Dec. 2007 World welterweight championship fight and then the aforementioned knockout loss to Pacquiao 17 months later.

Fury is 1-0-1 in the U.S., though both bouts featuring the scariest moments of his career. He was dropped for the first time as a pro in the 2nd round of his April 2013 clash versus former cruiserweight champion Steve Cunningham, whom he eventually stopped in the 7th round of their non-title fight in New York City.

[QUOTE=Htown-Finest;19832732]Can’t remember last time a fighter was so popular in UK as Ricky Hatton. AJ was super close. I remember the hatton fights. Sitting in my couch feeling like I was sitting in the stadium[/QUOTE] Which is the real reason…

Prime Hatton can not bully a prime Pacman 10 years ago both age 30 years old.

Good advice from Hatton, by his comments the Horn camp got it all wrong when he faced Crawford. Horn, who usually does not complain, said after the fight that he was just not right and prior he said the climate…

What ever time he got in Vegas he will be knocked out by Pacquiao that's the reality. :boxing::Thinkingo

Can’t remember last time a fighter was so popular in UK as Ricky Hatton. AJ was super close. I remember the hatton fights. Sitting in my couch feeling like I was sitting in the stadium