At this point, the only thing on which Tony Harrison and Jermell Charlo can agree is that they are due to fight each other later this month.

Even that topic has been subject to debate, especially given the circumstances leading to this point. 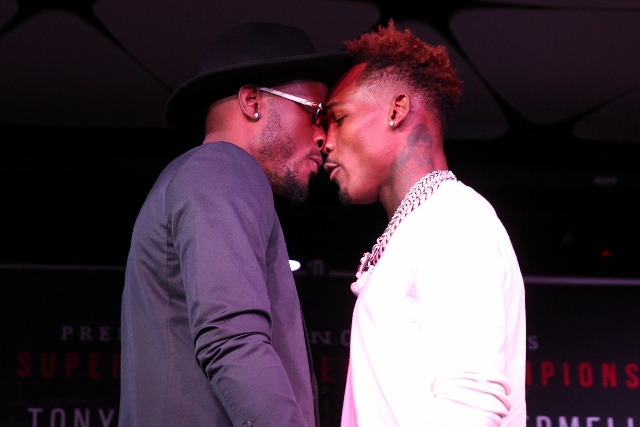 Fox aired the the first fight between the two, which ended with Harrison claiming a disputed 12-round unanimous decision to hand Charlo (32-1, 16KOs) his first loss, taking his title in the process. The free-to-air network will also carry the rematch, which was due to rematch in June, only for Harrison to suffer an ankle injury, prompting the postponement.

His challenger in waiting remains skeptical of the circumstances surrounding the six-month delay.

“I was like ‘It’s all BS, man.’ It’s all BS. C’mon man, you know it is,” Houston’s Charlo claimed during Fox Sports’ recent airing of PBC Face To Face: Harrison vs. Charlo II over the weekend. “I don’t want to play back and forth with you about what’s honest. It’s all a game.”

It wasn’t a game to Detroit’s Harrison (28-2, 21KOs), who hasn’t fought since his title-lifting effort over Charlo last December. The rematch will mark exactly 52 weeks to the day of that fight, the last time he’s seen any ring action.

Charlo was able to preserve the June date, scoring a sensational 3rd round knockout of late replacement Jorge Cota at the Mandalay Bay in Las Vegas, Nevada. Harrison was present at ringside for the Fox-aired event, which Charlo was quick to remind should have been their night to throw down.

“You realized how serious I am about this,” Charlo insisted. “The problem you’re realizing how bad I want this, that they lit a fire under this dude. We talk about June 23 taking place. It didn’t happen. We talking about June 23. You was there. It was my show.”

Clarification efforts only further fueled the debate, and Charlo’s insistence that Harrison delayed the fight by six months for reasons other than injury.

“We doing all this speculation for what.” Harrison wondered aloud.

It wasn’t the answer Charlo was looking for, or at least did not want to hear.

“Did you really hurt your ankle,” Charlo once again questioned.

“So I pulled out just so I could fight you now,” asked Harrison, who will make his first title defense. “Why would I even be here? I could’ve just gone and fight somebody else then. If I wanted to.”

“You can’t fight somebody else because the WBC ordered it,” noted the ex-titlist, who held the WBC belt from May 2016 through their first fight a year ago. “Homeboy you don’t know nothing.”

Once again, Harrison wasn’t having any of it.

“Homeboy, listen. You don’t know nothing, either,” shot back the defending champ, who took a swipe at Charlo’s Lions Only Promotions label which he shares with twin brother Jermall. “Young lion. You a cub.”

“This energy he trying to portray, this ain’t really him,” insists Charlo. “I know something about you, boy. You made out of Styrofoam. They made you up to be this clown, and it’s not right. You got a different animal in front of you. The man you fought [last December] is not the same Jermell Charlo.

His lone career conqueror believes the fight has already been won where it matters most.

No matter the debate on the validity of the reason for the six-month delay, there’s no questioning the authenticity of their two-way animosity.

[QUOTE=The D3vil;20249198]This is what I want to happen because I respect both of those guys & I think both are clean (or at least as close as you can get in boxing these days), but I think Harrison is scared…

[QUOTE=tokon;20246845]I think that Harrison has gotten to charlo. Him beating charlo and moving forward to fight j-rock would be good[/QUOTE] This is what I want to happen because I respect both of those guys & I think both are clean…

Harrison can win this with his jab and footwork. if he trades Charlo smokes him

Harrison got a gift the last time and he know it. Charlo landed over 30 more power shots and wobbled him several times. But Charlo should have learned to cut the ring off more and go to the body more…