Haney: They Made The Right Choice in Making Me Main Event

As BoxingScene.com reported earlier, Devin Haney will headline on his DAZN debut against Antonio Moran on Saturday May 25 at the MGM National Harbor in Oxon Hill, Maryland, live on DAZN in the US and on Sky Sports in the UK.

Haney (21-0 13 KOs) announced a co-promotional deal with Eddie Hearn’s Matchroom Boxing USA last week and now the Lightweight sensation will headline against Moran (24-3 17 KOs), the 26 year old who has stopped four of his last five opponents and was narrowly edged out by Jose Pedraza in June.

‘The Dream’ will be hunting World title action in the second half of 2019, sitting at number three in the WBC, five in the WBA, eight with the WBO and ten with the IBF, and the 20 year old Las Vegas ace will be looking to underline his lofty position in the rankings with a stellar showing in Maryland.

“It’s unfortunate that Oleksandr Usyk had to pull out because of injury,” said Haney. “I wish him a fast and speedy recovery. I’m very happy Matchroom and DAZN made the right choice in making me the main event.

“The MGM National Harbor will be the perfect place for me to show up and show out at. The fans in this area of the world really know boxing. I will put on a great show for them. I’m the future of this sport and on May 25 I will show the world how much I’ve grown inside the ring.” 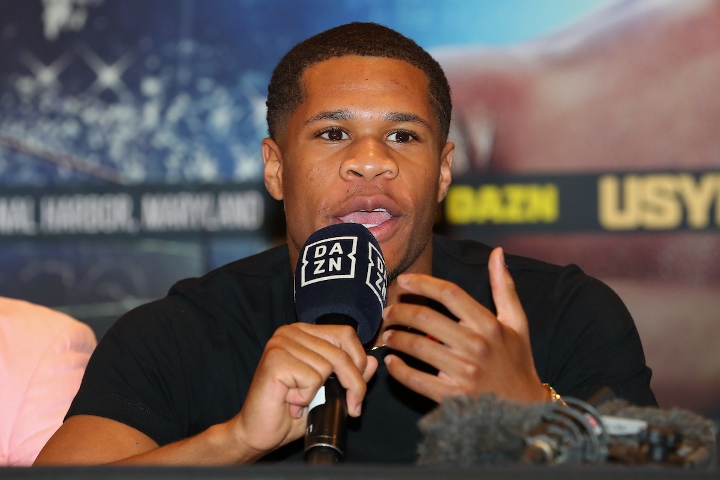 “We know that Devin is a future superstar but Usyk’s unfortunate injury now gives Devin the chance to headline first time out on DAZN,” said promoter Eddie Hearn. “Moran will give Devin the toughest test of his career so far, last year he dropped a close decision to WBO World champ Jose Pedraza and is coming off an impressive knockout victory.

“Heavyweight action remains on the card with two top 15 ranked fighters Michael Hunter and Flip Hrgovic who are both searching for a shot at the World heavyweight title and Jessica McCaskill and Anahi Sanchez face off in an exciting World title unification. It’s going to be a great night of boxing and I expect Devin Haney to steal the show in Maryland!”

Don't think people realize how tough this fight is, Moran pushed Pedraza to the brink right before he beat Beltran. Dude is tough and will push Haney

I am still upset about Haney signing with Hear...not sure why he signed with someone he did not need, but more than anything else, disappointed that he not only signed, but an American did not sign him.

Haney was making waves on his own. He needs Hearn for this? Let's get somebody to make us look good. Genius! Who would have thought?