Haney: Just Have To Keep Calling These Guys Out, I Want All The Belts

HOLLYWOOD, Fla.—Now comes the part where Devin Haney and has to make sure that history doesn’t repeat itself.

Earlier this month, the unbeaten lightweight titlist returned from a career-long 52-week layoff to maintain his unbeaten record, scoring a dominant 12-round win over Miami’s Yuriorkis Gamboa. The win—which aired live on DAZN from Seminole Hard Rock Hotel & Casino in Hollywood, Florida—marked the second defense of the title Haney begrudgingly accepted without it being attached to a superfight he long craved, and with the hope that future fights to come are for more than just one belt at stake.

“I want all of the belts,” Haney told BoxingScene.com after his latest win. “I want to keep active and I want big fights, not just stay busy fights. I’m chasing belts.” 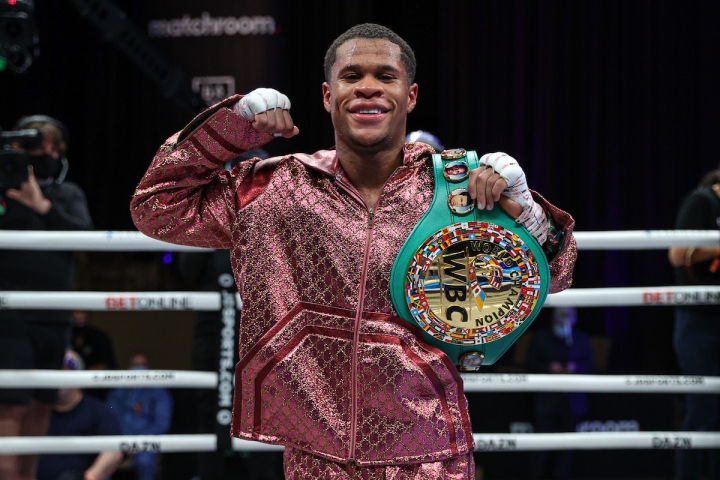 Las Vegas’ Haney (25-0, 15KOs) was in pursuit of the belt he currently possesses along with several more last summer, when Vasiliy Lomachenko (14-2, 10KOs) reigned as unified titlist. A calculated decision was made by Haney and co-promoter Eddie Hearn to participate in a WBC-imposed tournament that was supposed to lead to a head-on collision with the Ukrainian southpaw.

Instead came the political side of the sport. Lomachenko—through Top Rank—filed a request with the WBC to be designated as “Franchise” champion, which in turn would free himself from any mandatory obligations, which at the time meant facing Haney who owned the sanctioning body’s interim title.

With the move came the upgrade for Haney from interim to WBC champion, having now twice defended the belt. His win comes three weeks after Brooklyn’s Lopez (16-0, 12KOs) outboxed Lomachenko to unify three belts along with claiming the lineal lightweight championship.

Like his predecessor, Lopez now also carries “Franchise” title status with the WBC, which he and Top Rank have attempted to package as his serving as the undisputed champion. The sanctioning body hasn’t helped clarify matters, going along with the program heading into the October 17 superfight. WBC brass has since coming around and recognizing Haney as its champion, even honoring the 21-year old with his official belt at Friday’s weigh-in preceding his landslide victory over Gamboa (30-4, 18KOs).

The next logical step should be a showdown with Lopez for the true undisputed crown. Also out there within the division are mouthwatering showdowns with Gervonta Davis (24-0, 23KOs) and the winner of the December 5 clash between Ryan Garcia (20-0, 17KOs) and Luke Campbell (20-3, 16KOs), the latter for the WBC interim title and thus Haney’s mandatory challenger—if whomever prevails elects to go that route.

“We just have to keep putting pressure on these guys, keep calling them out to make sure these big fights happen,” Haney insists. “I can’t push them into the ring with me. The big fights are what I want. “We’ll just keep pressing for them.

“At the end of the day, I’m still only 21 and the big fights are going to come. I don’t think anyone in my position has gone a whole career without big fights. This generation, we’re animals. So, let’s get in the ring and give everyone these big fights.”

Here we go with the tard promoter promotional company fanboi jive. Wonder why other sports laugh at the window lickers of boxing fandom? Read above and that’ll clear things up. Ever see baseball fans filling up boards yacking about owners…

[QUOTE=factsarenice;20901116]Man you missed it. Thurman demanded 4 x more than his biggest fight. Danny Garcia said no, just no. Danny Garcia didn't even know who Yordenis was, nobody does. Read up, lots of things have changed since you stopped following…

Lopez talked all that sh💩t but won’t fight him. 🥊

why not just make them offers? you have dazn who does that all the time but i havent seen any offers to loma or lopez. i saw offers to gamboa and alfredo santiago though. yeah those guys :rofl:

Lets face it, NONE of the young guys are willing to fight one another. [QUOTE=ajamudc;20900926]I know you probably don't really care about the facts, but you do know he was mandatory and calling for a fight with Lomo, before Lomo…