Haney: I Feel Like They Should Reinstate Me As WBC Champion

Devin Haney can’t pick a winner between the two fighters who’ve been ordered to fight for his old title—and hope that he never has to make that choice.

Javier Fortuna and Luke Campbell are just among the many casualties in boxing to watch their next fight get postponed in the wake of the ongoing coronavirus disease (COVID-19) pandemic. The two were due to collide on April 17 in Oxon Hill, Maryland, vying for the World Boxing Council (WBC) lightweight title that Haney was forced to abandon due to injury.

Haney was ordered to face Fortuna as his mandatory challenger, but was forced to withdraw from talks after undergoing shoulder surgery stemming from injuries aggravated in his 12-round win over Alfredo Santiago in his lone title defense last November. The bout came less than two months after a 4th round stoppage of Zaur Abduallev to claim an interim title that was upgraded to the full version in between the two fights. 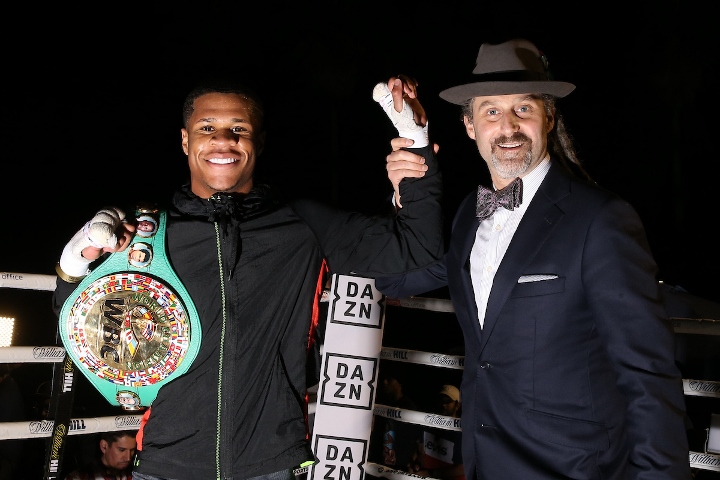 However, the title reign was shortlived. His aforementioned procedure and subsequent recovery put him on the shelf through May, prompting the WBC to order a vacant title fight between Dominican Republic’s Fortuna (35-2-1, 24KOs) and England’s Campbell (20-3, 16KOs).

“I think it’s a 50/50 fight,” Haney said of the matchup during an interview on promoter Eddie Hearn’s Instagram Live feed on Monday. “Any one of those guys can beat each other on any given night.”

Naturally, Haney feels he’s a cut above the rest and still considers himself to be a champion despite the absence of a physical title. The WBC named him “Champion Emeritus” which would allow him to challenge for his old belt once he’s ready to return to the ring.

With the aforementioned clash between Fortuna and Campbell postponed along with many other bouts due to the COVID-19 health crisis, Haney will be ready to return at the same time to take on either foe—or both, if he truly gets his way.

“Luke Campbell, that’s a fight I will want if he beats Fortuna,” Haney notes, though with a disclaimer. “If I don’t get reinstated as WBC champion, the winner I would love to fight.

“I feel like they should reinstate me—I was stripped because they felt I wouldn’t be active to fight my mandatory. But the two (top contenders) never fought.  So, what sense does that make? If I’m ready to fight the mandatories… let’s make this happen.”

If you beat the man that beat the man you are a Champ! Otherwise, stop crying about a Belt that you never earned! And on a side note, since there is a WBC Franchise Belt Holder who earned the old…

Not if Garcia fights and beats Linares first. Guarantee Ryan gets the nod over Haney for the belt !

I rate Haney (or his potential, at least), but this kind of sense of entitlement, and the frivolous nature of the numerous belts, is what so often ails boxing these days. Who cares about what he feels he should be…

He's been out too long. Devin will need to retool around his injury. Strange how he got hurt vs a no hoper. He signed with Hearn looking to pad his record and now he's broke down.