Haney: Correct Thing To Say Was I Wouldn't Lose To Anybody; You Live & You Learn

Devin Haney has learned an invaluable lesson from the controversial comments he made last month.

The unbeaten WBC lightweight champion acknowledged during Chris Mannix’s most recent Sports Illustrated boxing podcast that he shouldn’t have stated he “will never lose to a white boy in my life” as part of a live YouTube chat with fans. 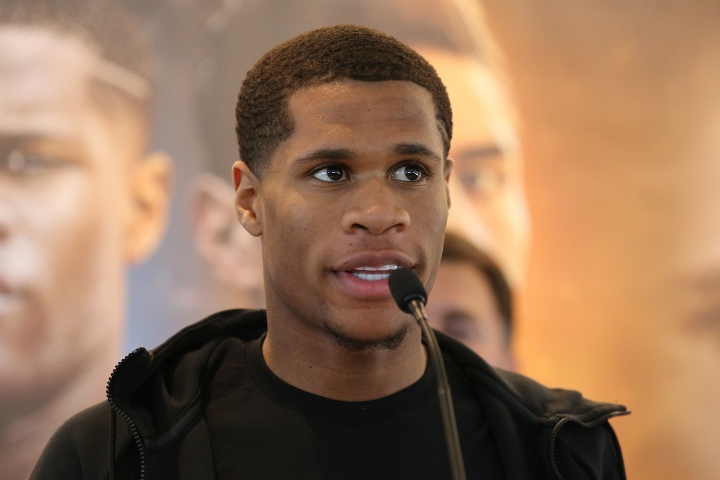 The 21-year-old Haney’s comments created a firestorm on social media, message boards and elsewhere. Haney, who is black, was taken aback by how some fans responded to his inflammatory comments.

“I was surprised [by] how the world was trying to – well, some of the fans were trying to portray me as someone that was racist, which is not the case at all,” Haney said. “You know, my siblings are half white, half black. You know, come on now, like my younger brother and sister. My stepmom is white. Like, come on now. So, it was crazy, too. My whole team is diverse. You know, I don’t discriminate. I’m not racist at all. So, that was definitely, you know, surprising. I didn’t expect that at all. But what can you do about it?”

Las Vegas’ Haney promptly apologized for his comments last month and realized he shouldn’t have said what he said.

Haney made those statements in response to a comment made about Vasiliy Lomachenko by someone identified as MehariNation Sports Podcast during a live chat on the 78SPORTSTV YouTube channel. Ukraine’s Lomachenko, the WBA/WBO lightweight champ, is white.

The WBC recently reinstated Haney as its 135-pound champion. He was relegated to the WBC’s champion in recess after having shoulder surgery in December.

Haney (24-0, 15 KOs) will be allowed to make an optional title defense once the COVID-19 pandemic ends. If he wins that bout, Haney will have to defend his title against the winner of a bout between the Dominican Republic’s Javier Fortuna (35-2-1, 24 KOs, 1 NC), the WBC’s number one lightweight contender, and England’s Luke Campbell (20-3, 16 KOs), its second-ranked challenger.

Fortuna and Campbell were supposed to fight for the then-vacant WBC lightweight title April 17 at MGM National Harbor in Oxon Hill, Maryland, because Haney was recovering from surgery. Fortuna-Campbell was postponed indefinitely due to coronavirus restrictions.

[QUOTE=Real King Kong;20583536]I accept your concession. your attempt to set up irrelevant straw men, assigning beliefs in order to tailor make an adversary to fit your argument, and name calling was enough, but this post seals it.[/QUOTE]Again, lying is what…

[QUOTE=Goldie;20578716]This isn’t an argument lol. This has been a clown session. I’ve clowned you so bad that you’re scared to even claim your own country. You don’t want to claim your country because you know it’s steeped in racism white…

[QUOTE=Real King Kong;20578494]whatever you want to latch to my friend. it's completely irrelevant. either you have an answer or you don't. I'd say you're about spent. name calling, assigning beliefs, generalizing the populations of entire countries...at this point you're arguing…

Vasyl Lomachenko, "I will never lose to a black boy in my life. ... Listen, can't no black boy beat me.... I fight a black boy like ten times, I'm gonna beat him ten times." WTF???

[QUOTE=Goldie;20578184]Skimmed this and still not an answer of the country your stupid a$$ is from. You’re talking to yourself until you muster up the courage in that caveman body to claim your country. I’m not even reading your bullsht until…