Christina Hammer has for years craved a showdown with Claressa Shields.

It’s why she agreed to travel to the Flint, Mich. hometown of the two-time Olympic Gold medalist last June, with the two appearing on the same Showtime card. It’s also why she sat ringside shortly after her undercard win over Tori Nelson to watch Shields become a two-division titlist in beating Hanna Gabriels—and also why she immediately stepped to her in the ring shortly after the conclusion of the main event.

Five months later, it was ultimately why she was left devastated when unable to follow through with their planned World middleweight championship clash last November.

“It was very disappointing,” Hammer (24-0, 11KOs) admitted during a recent media conference call of an undisclosed illness which forced her to withdraw from their originally scheduled November 17 clash. “But everything happens for a reason.

“I’m stronger now, the time has come and I’m ready to be the undisputed champion.” 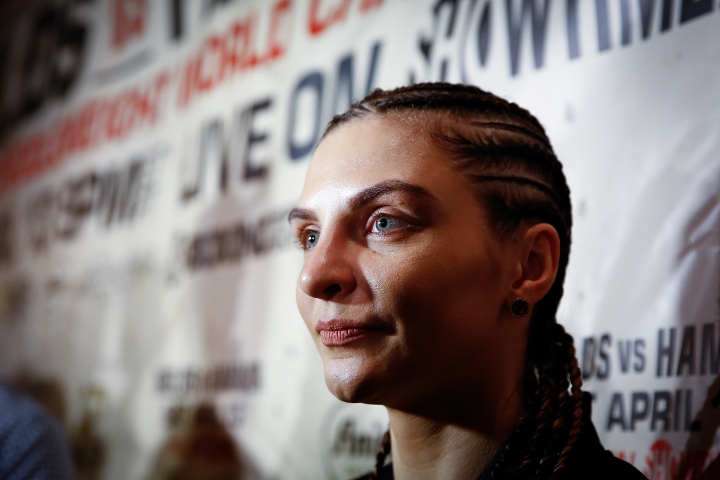 That opportunity now comes this weekend.

The pair of unbeaten, two-division and reigning middleweight titlists collide this Saturday in Atlantic City, New Jersey, with the Showtime-televised headliner to crown just the seventh undisputed world champion in the four-belt era.

Hammer—born in Kazakhstan, but who was raised in Germany since infanct—will look to make the 12th defense of at least one middleweight title. Her 8½ year reign also includes a brief stay as a super middleweight titlist and near-disastrous turn at super welterweight, but for the most part has served as among the very best female boxers in the world today.

In Shields (8-0, 2KOs), she encounters a two-time Olympic Gold medalist who has only lost once in her storied amateur career and has raced to the top early in her pro career.

None of this is lost on the 28-year old long-reigning titlist, who openly embraces the magnitude of Saturday’s event.

“I think it’s the biggest fight of my career,” Hammer readily admits. “I’ve been waiting for a long time to unify all of these belts. Every fighter dreams of winning all of the belts. Fight by fight, I prepare for everything. We are both undefeated and are world champions.

“I’m very grateful for this opportunity to fight on Showtime. It’s a big step for women’s boxing and it means a lot to be fighting for all of the belts with the undisputed middleweight championship on the line.”

[QUOTE=Southpawology;19656431]Obnoxious, Rude Behavior. You triggered????[/QUOTE] So you must consider Ronda Rousey to be the GOAT hoodrat then...naw not triggered just curious

[QUOTE=Oldskoolg;19655899]I wonder what her mystery illness is/was? Anyone taking bets on one of the HEPs?[/QUOTE] It was [email protected] warts.

[QUOTE=Southpawology;19655883]hope hammer shuts this loudmouth hoodrat up[/QUOTE] What makes her a hood rat? Her skin color or what?

[QUOTE=Oldskoolg;19655899]I wonder what her mystery illness is/was? Anyone taking bets on one of the HEPs?[/QUOTE] I saw it reported that it was some kind of stomach ailment.