But six months later, something still doesn’t sit right with Gvozdyk regarding the unusual conclusion to their scheduled 12-round match March 30 at 2300 Arena in Philadelphia. Gvozdyk successfully defended his WBC 175-pound crown for the first time by fifth-round technical knockout, the result of Ngumbu’s injury to his right leg.

“It was a little bit suspicious for me because the guy complained about a tendon rupture or something like that,” Gvozdyk told BoxingScene.com before meeting with a group of reporters Wednesday at the Renaissance Philadelphia Airport Hotel. “And then, after this fight, he fought again in three months. So, it was kind of suspicious. Normally, people with those kinds of injuries would use crutches to walk. But I don’t know. I’m not a judge, and I’m happy everything happened like it happened.” 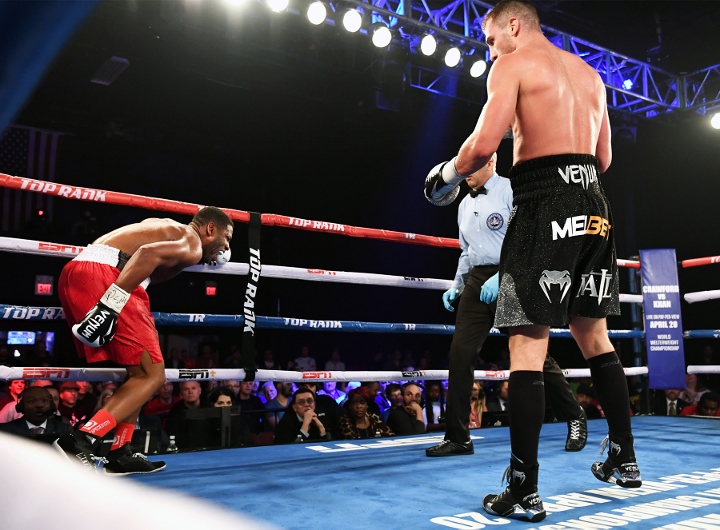 Ngumbu began limping and went to the canvas during the fifth round. He repeatedly grabbed at his right calf and conferred with those in his corner before they informed referee Eric Dali that Ngumbu couldn’t continue.

The emotional contender collapsed in a neutral corner after the bout ended and had to be consoled. Officials initially indicated that The Congo’s Ngumbu had suffered an injury to his right Achilles’ tendon.

Ukraine’s Gvozdyk (17-0, 14 KOs) and Russia’s Artur Beterbiev (14-0, 14 KOs), the IBF champion, are set to fight Friday night in a 12-round, 175-pound championship unification match at Temple University’s Liacouras Center (ESPN; 10 p.m. ET/7 p.m. PT). Handicappers have installed Gvozdyk as a slim favorite over Beterbiev, but Teddy Atlas, Gvozdyk’s trainer, knows his fighter will have to perform better to beat Beterbiev than he did when he encountered Ngumbu.

“I thought that we fought an awkward opponent, and I thought he was getting, quite frankly, into his rhythm when the fight got stopped,” Atlas said of Gvozdyk’s outing against Ngumbu. “It was just he never really got a chance to get into his rhythm. I don’t think it was one of his performances. It wasn’t one of my best performances, because I’m responsible for that. But I think that it was the kind of fight that you needed time to get into it, and he was getting into that place where he was starting to take control of the fight and gonna get only better, with a very awkward opponent. And unfortunately, it ended the way that didn’t satisfy us, or anybody.”

[QUOTE=Pigeons;20128281]He shouldn't have been fighting Ngumbu in the first place. When you take part in such comical mismatches, don't be surprised when the absurd happens.[/QUOTE] After almost killed a guy, the Nail needed ease fight to check mental health.

He shouldn't have been fighting Ngumbu in the first place. When you take part in such comical mismatches, don't be surprised when the absurd happens.

The guy already fought in July (went all 12 rounds). That means he started a camp for that fight somewhere in May — just about a month and a half after the Gvozdyk fight, LOL.

Nail may not have accused Doudou Ngumbu of faking an injury, but I sure did