RENO, Nevada – Joet Gonzalez acknowledged that Shakur Stevenson was much better than him Saturday night.

Gonzalez still doesn’t see greatness in the skillful southpaw who decisively defeated him in their WBO featherweight title fight.

“I think he’s good, but he’s not great like people are still saying,” Gonzalez told FightHype.com following his unanimous-decision defeat to Stevenson. “I mean, he still beat me. You know, no excuses, but I think there’s more special fighters out there.” 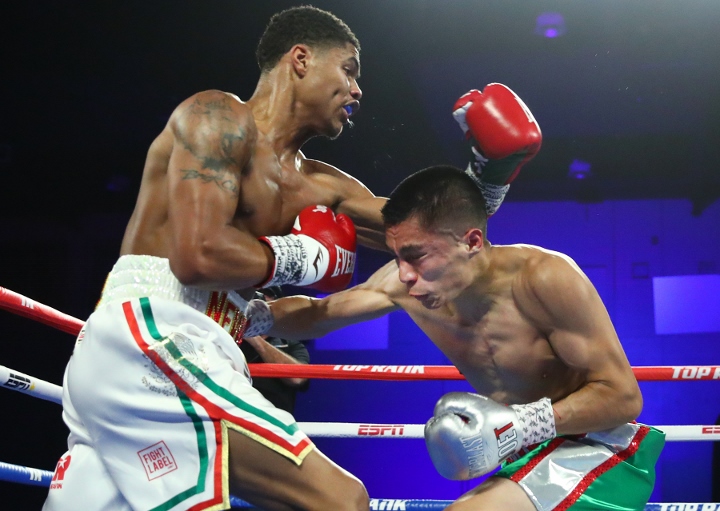 His opinion of Stevenson notwithstanding, Gonzalez’s 22-year-old opponent completely out-classed the previously undefeated featherweight contender in their 12-round, 126-pound championship match at Reno-Sparks Convention Center.

Stevenson’s defensive prowess particularly befuddled Gonzalez for most of their one-sided bout. According to CompuBox, Gonzalez landed only 53-of-494 punches overall in 12 rounds (10.7 percent).

“When I tried to put the pressure on, my punches weren’t landing flush,” Gonzalez said. “And when they would land, he would make the second and third one miss. So, it was difficult. And that was pretty much the main thing.”

The 26-year-old Gonzalez (23-1, 14 KOs), of Glendora, California, expected to encounter an improved Stevenson from the inexperienced, 19-year-old he sparred three days before Stevenson made his pro debut in April 2017.

“I have no excuses,” Gonzalez said. “Obviously, sparring is different from fighting. I didn’t come in with my mentality like, ‘Oh, I beat him in sparring, I’m gonna beat him again.’ It’s totally different. Smaller gloves, no headgear. It’s a different thing, so no excuses. I lost and it’s OK. I’ll come back.”

Gonzalez had success in the seventh round, the round each judge gave him. He couldn’t build on that momentum in the eighth round, when Stevenson seized control of their fight again.

“That was probably one of the best rounds,” Gonzalez said. “I put the pressure on him and landed. I tried to do it again, but he was moving more. I guess he sensed I got him right there, so he woke up. He woke up and he went back to doing what he was doing.”

Gonzalez commended Stevenson for his performance Saturday night, but he didn’t seem ready to put their personal beef behind them. Stevenson has been dating Gonzalez’s younger sister, Jajaira, who is estranged from her family due to her romantic relationship with Stevenson.

Their unusual situation was well-documented before they boxed.

Stevenson seemed prepared to move forward from it and respectfully approached Joet Gonzalez in the ring after the decision was announced. Gonzalez declined to speak to Stevenson.

“It’s gonna take time,” Joet Gonzalez said. “You can’t expect this just to go away with one fight, one night. He disrespected me for years, my family and I. So, time will tell. But he’s still gotta earn it. Whether this fight he won, it doesn’t really matter. All the disrespect’s not gonna go away just because he won. But he’s gotta earn the respect.”

[QUOTE=Realizniguhnit;20158211]Dumbazz still doesn't get it. Tarver won golden gloves at like 25 years old fool lol. You don't know chit lol You really can't comprehend can you? Joet is a 126 pounder so yeah I recon you could probably take…

[QUOTE=john l;20154036]Tarver started boxing as a kid. When he picked back up he became the #1 guy in the country as a amateur and was a gold medal fave. Again you say after ONLY 6mths you could make someone capable…

Was my first time watching him. tbh, I don't get the kerfuffle. Reckon I ought to hit youtube or some ****.

[QUOTE=Hot Shyt;20154404]"Nah, It proves you know nothing about growing up in the hood and never been in the streets. FOH" lmaoo you goofy as hell[/QUOTE] Just speaking facts really. You got a lot of minority kids in the hoods around…

Shakur Stevenson in 13 fights has 7 KO's and hasn't really fought anyone except Joet Gonzalez who only has 10 more fights. The jury is still out lets see the level in competition jump...............and then just maybe. LOL! Guys are…