It’s safe to say that Joet Gonzalez isn’t short on motivation ahead of the biggest fight of his career.

The unbeaten featherweight is days away from a vacant featherweight title clash versus Shakur Stevenson, a fight he’s envisioned for years and for a belt he’s craved since 2019 began.

“This is the opportunity I’ve wanted all year, and can’t think of a better opponent to beat to win the title,” Gonzalez (23-0, 14KOs) told BoxingScene.com of his long building grudge match with Stevenson (12-0, 7KOs), which airs live on ESPN+ from Reno-Sparks Convention Center in Reno, Nevada. “There are a lot of things Shakur has said and done. Come Oct. 26, he’s going to pay for all of that.” 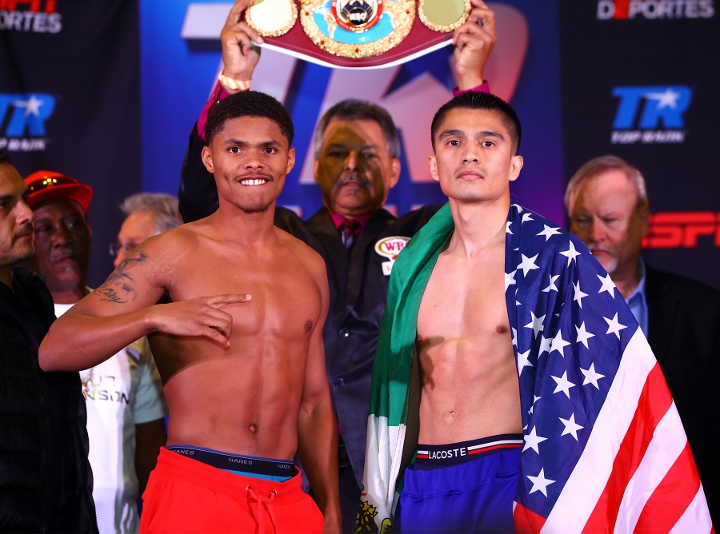 A lot has been made of the family feud angle between the two, as Newark, New Jersey’s Stevenson, 22, is the longtime boyfriend of Gonzalez’s younger sister, Jaijara Gonzalez—herself an established amateur boxer as a three-time junior World champion and 2018 U.S. National quarterfinalist. Their courtship—now three years and running—has never sat well with big brother Joet, who still enjoys a strong relationship with his sister and his tight-knit family—just not with her plus-one.

“It’s definitely more motivation fighting Shakur for the world title,” admits Gonzalez, though in a productive manner. “We’re fighting for the world title, that’s been my dream and I don’t need any other reason to be ready for an opportunity like that. But when it comes to (Stevenson) and all the things he’s said, of course it makes you look forward to winning even more.”

Both are coming off of separate knockout wins on the same July fight night, though some 3,000 miles apart. Stevenson scored a 3rd round knockout of late replacement Alberto Guevara this past July in his Newark hometown, barely a couple of hours after Gonzalez picked up his third straight knockout in a 6th round stoppage of former contender Manuel Avila.

The reviews following their respective performances vastly differed, though perhaps due to the manner in which each was presented. Gonzalez’s latest win streamed live on the undercard of a DAZN telecast, similar to his stoppage win over former titlist Rodrigo Guerrero earlier this year.

Stevenson’s bout headlined a primetime edition of boxing on ESPN, having also fought on the main network in a well-publicized 1st round knockout of former title challenger Viorel Simion last October. Wedged in between ESPN prime appearances were wins over Jessie Rosales and another former title challenger in once-highly touted Christopher Diaz, all while barely losing a round along the way.

“He’s favored to win, and I understand why people think that,” Gonzalez notes. “He’s a good boxer and you don’t win an Olympic medal by being average. But there are a lot of guys already coronating Shakur, acting like he just needs to pick up his belt.

“So, when I go out there and beat him, I will be the best featherweight in the world today. If they’re already hailing him now, then I will have to be the best in their eyes as well after Saturday night.”

rooting for the black man to make this racist and his team cry tears of sorrow.

[QUOTE=nick_viking;20145286]Keep it for Kovalev v Canelo and Joshua v Ruiz surely? I wish DAZN were available in the U.K. it’s such good value for boxing fans (compared to the constant PPV on sky / BT etc over here)[/QUOTE] This fight…

[QUOTE=Boxing Hero;20145133]This is one of the fights I'm looking forward to. I'll get the app just for this fight and possibly cancel. Can't wait!!![/QUOTE] Keep it for Kovalev v Canelo and Joshua v Ruiz surely? I wish DAZN were available…

This is one of the fights I'm looking forward to. I'll get the app just for this fight and possibly cancel. Can't wait!!!