Golovkin Survives A War, But Does He Want To Do That Again?

New York, NY - Gennadiy Golovkin settled into a comfy chair in a television studio tucked in the side streets of the Chelsea neighborhood of Manhattan, visibly exhausted from a full day of cutting weight then answering the same four questions on a satellite media tour, hiding his haggardness with his trademark smile and a fresh Jordan tracksuit.

DAZN reporter Claudia Trejos asked the question every fighter no doubt asks themselves every day—especially when they’re 37, a future Hall of Famer, and already wealthy.

“Why do you still fight?”

Golovkin, in a moment of cheekiness and candor with the aid of his improving English, replied: “It’s like sex, or something, you know? Sometimes you just crave it.”

If it was a fight he craved, he got everything he could stomach and more on Saturday night as he eked out a decision win over Sergiy Derevyanchenko in what was the most brutal fight of Golovkin’s career, and perhaps in a prizefight ring anywhere this year. Nothing about it seemed pleasurable for GGG, who even at the conclusion of the bout could not muster the strength to hoist his arms all the way overhead, and upon hearing the decision in his favor, was either too tired, too injured or too frustrated to flash anything more than a slight grin before immediately embracing Derevyanchenko.

Anecdotally, Golovkin was hit harder, hit more often, and hurt worse than ever before. Statistically, that is supported by the CompuBox numbers, which showed Derevyanchenko landing 230 punches--183 of which were power shots—on GGG.

“After the first round, I (felt), ‘this is an easy fight for me.’ No, this is (a) tough fight,” said Golovkin in his post-fight interview with DAZN’s Chris Mannix. “I think it was a bad day for me, a good day for Sergiy, a good day for his team. Guys, this is a huge experience for me. Right now, I’m ready. I know what I need, exactly.”

Though Golovkin edged Derevyanchenko in overall connects according to CompuBox, many observers felt the scorecards—which were 114-113 and 115-112 twice—should have been in favor of the underdog.

Apart from the opening round, in which GGG dropped Derevyanchenko with a chopping shot to the top of the head, he never looked fully comfortable or in control of the fight. Fighters can indeed win fights while in discomfort and fighting their opponent’s pace, but particularly for observers who weren’t scoring on a round by round basis, the feeling one had at the end of the bout was that GGG was the one absorbing the bigger blows, and was more frequently in peril. 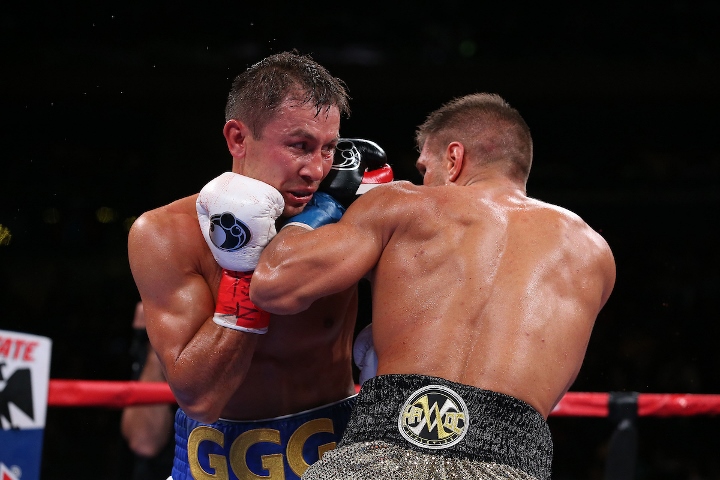 “I think that GGG is a great, great, great fighter, and he's had all these moments in his life to cement his legacy. Tonight, Sergiy Derevyanchenko cemented his legacy, and he was robbed of that moment,” said Derevyanchenko’s promoter Lou DiBella. “It made me feel sick, because that was like a Gatti-Ward fight, but fought on a skill level like ten times above. But tonight wasn't GGG's night, and I think he knew it.”

The easy conclusion to come to regarding the fight is that Golovkin got old overnight, and is now officially past his prime. Depending on how you scored the two bouts against Canelo Alvarez, and how much stock you put into knockouts, you may have already felt that way. But that may be fair to neither Golovkin nor Derevyanchenko.

It’s true that the very best physical version of Golovkin likely existed a few years ago. But in evaluating this performance and what it says about his skill level, one must be careful not to discredit Derevyanchenko, who remains one of the five best middleweights in the world. If this version of Derevyanchenko were transported back in time to face a “fresher” version of Golovkin prior to the Danny Jacobs and Canelo bouts, he still would have been the toughest opponent GGG had faced. This fight might have shown evidence of a decline in GGG, but it wasn’t because he was struggling with an opponent he would have certainly dominated in past years—this version of Derevyanchenko who cleavered him with power shots all night long would have been trouble for him even at the peak of his powers.

Golovkin said after the bout that he wasn’t fully focused heading into it, and there were natural questions about his motivation in a bout lesser in magnitude than his dream trilogy meeting with Canelo.

“You've got a guy who's just been given an opportunity to change their life, and they're going for it. And in the other corner you've got a guy who really wanted another fight, but is actually in this fight, and he had to grit down on his gumshield and tough it out,” was GGG’s co-promoter Eddie Hearn’s summary.

Whether he had motivation coming into the bout or not, he found it inside the ring, even if that impetus was simply to keep the hopes of another fight alive. There were ample opportunities and reasons to fold rather than walking into a woodchipper round after round, but GGG never did.

The question is whether he’ll want to go through that again—either in the form of a rematch, or a similarly tough fight. In his mind, surely, the Derevyanchenko bout was a layover, something to do while he campaigns for a third Canelo fight. But with Canelo’s ascension to light heavyweight, and the growing possibility that the fight never happens, is another fight like Saturday night’s worth it? After coming so perilously close to losing, and feeling discomfort like you’ve never felt in a ring before, are the physical and financial risks worth it?

Will GGG still have that craving, that same lust he had before this bout, or is the pain no longer worth the pleasure?

Since I know him, GGG never dominated any top contender, Jacobs, Draw and Loss with Canelo and clearly loss with Derevyachenko. Never rise up in weight, he is not that great folks.

Derevyanchenko was always going to pose problems for GGG, he put up a good fight against Jacobs, those fights were similar, but Derevyanchenko came up short both times, no shame in that. GGG is nearly 38 and looks it, he…

Hopefully there is a rematch.. I don't want GGG to finght since Canelo is in his prime and this time around he will win convincingly. He should go look at money fights like Murata in Japan, Billy Joe Saunders in…

But if I were him, I would not want one. GGG has finally started to show his age. Somebody else said he "couldn't pull the trigger," which is the best way to express his millisecond hesitancy to throw a punch.…