Golden Boy Prez: Our Intention Is To Return July 4, Fans Miss The Sport

A prior announcement by Golden Boy Promotions hoping to stage a show by July 4 has gained a significant boost in the right direction.

The California State Athletic Commission (CSAC) met via video conference on Friday, where the end result was a pathway towards allowing combat sports to resume operation this summer. Regulations passed by the commission were submitted the state’s Office of Administrative Law, which will review the proposed policies including for coronavirus disease (COVID-19) testing.

Once approved, the state can enjoy live boxing for the first time since March 6. With any luck the first show back will be on Independence Day—at least if the team at Golden Boy gets its way.

“Our intention is to return on July 4, just like Oscar has mentioned in prior interviews,” Eric Gomez, president of Golden Boy Promotions told BoxingScene.com. “Fans miss the sport, and they miss seeing the many excellent fighters we have in our stable.” 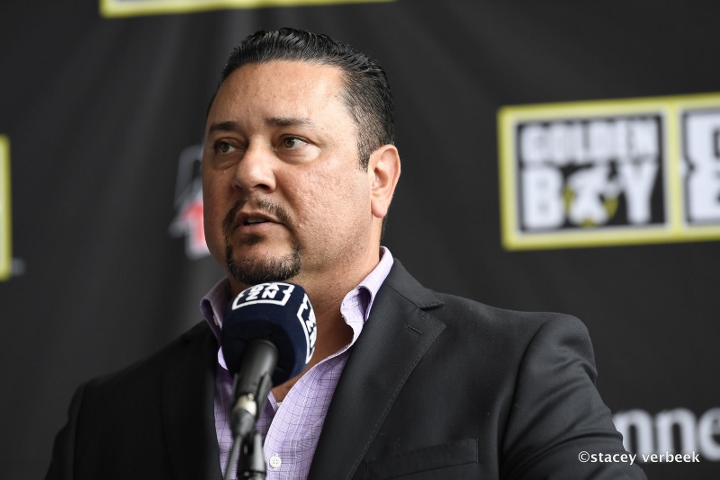 Golden Boy lost out on several shows due to the ongoing COVID-19 pandemic, including cards on March 19, March 28 and April 25 from three separate venues in California.

A stacked March 28 card at The Forum in Inglewood was to feature unbeaten welterweight Vergil Ortiz Jr., the 2019 Prospect of the Year who was hoping for a four-fight campaign in 2020 and possibly a title shot somewhere in the mix. Unbeaten flyweight Seniesa ‘Superbad’ Estrada and junior welterweight contender Pablo Cano were scheduled to appear in supporting bouts.

Four major title fights were due to appear on an April 25 show in Indio, California, all in supporting capacity to a light heavyweight crossroads bout between Sergey Kovalev and Sullivan Barrera.

All suffered postponements, as well as a number of shows on Golden Boy’s Thursday Night Fights prospect-based series on DAZN. It leaves an overwhelming number of boxers under contract with the expectation of returning to the ring the moment clearance is given for the sport to resume, even in a closed-doors setting as will be the case in Nevada beginning June 9.

Golden Boy Promotions—which is headquartered in Los Angeles—is prepared to go that same route in California. Then intended headliner for its proposed July 4 show is Ryan Garcia (20-0, 17KOs), a rising lightweight contender and the company’s second-best ticket seller only to Mexican superstar and training stablemate Saul ‘Canelo’ Alvarez. Fans in attendance are less of a priority at present moment than its athletes getting back in the ring.

That said, the date is rapidly approaching and with the aforementioned emergency regulations still subject to state approval. Whenever the first show back takes place, it will do so with all ducks in a row.

“There are a set of guidelines and protocols that we must follow in order to ensure the safety of every single person involved,” notes Gomez. “That means doing a lot of work behind the scenes with the commission and our staff so that the sport of boxing can execute a responsible return.”

The state of California has hosted 13 shows thus far in 2020, though mostly on the club level. Garcia headlined the biggest show in state this year, scoring a 1st round knockout of two-time 130-pound title challenger Francisco Fonseca this past February in Anaheim.

California played host to 101 pro boxing events in 2019, far and away the most of any state in the country. The ongoing global health crisis puts the Golden State well off last year’s pace, although still the nation’s leader for 2020 with pro boxing of any kind not taking anywhere in the U.S. since March 13.

Should the state office approved the proposed health regulations, it figures to be business as usual for the California boxing scene—the type of good news the sport sorely needs in this day and age.

I am desperate to see those matchmaking in Golden Boy Stable, where fights are competitive, fun and upsets happens. :boxing:

[QUOTE=Oldskoolg;20587851]Better hurry oscar, golden boy appears to be the only way to save the deadzone[/QUOTE] Streaming media technologies are commodities for the future. The law of consumerism means the fans whom were growing DAZN want to get back to life…

Better hurry oscar, golden boy appears to be the only way to save the deadzone