If ever there is a chance for an upset to take place in the early wave of post-pandemic boxing action, bettors are literally willing to gamble on Tuesday’s main event in Las Vegas serving as the first such instance.

Joshua “Don’t Blink” Greer Jr. remains the odds-on favorite to prevail in his 10-round bantamweight scrap versus Philippines’ “Magic” Mike Plania, although heavy action has drastically narrowed the gap from the opening line. The top-rated bantamweight contender was once as high as a 16-1 favorite (bet $1600 to win back another $100) to prevail, but is already down to just 4-1 as of Tuesday morning, according to sportsbook Bet365.

Current odds on Plania will earn bettors a return of $275 on top of a $100 bet placed on the 23-year old boxer from General Santos City, Philippines. 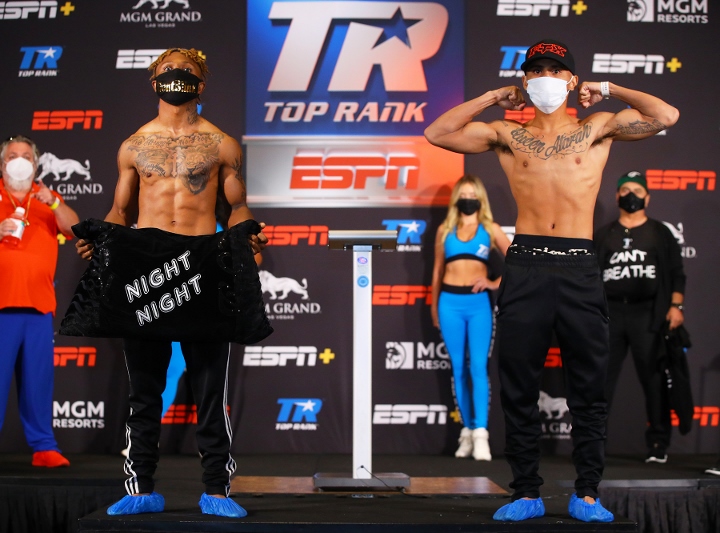 One working theory is that Plania’s built-in fan base is responsible for a portion of that action, which now has the 23-year old boxer from General Santos City, Philippines down to a +275 underdog (bet $100 to win back another $275). There is also the acknowledgement that Greer (22-1-1, 12KOs) has perhaps reached his ceiling, as he risks a shot at a bantamweight title fight with this ESPN headliner.

“I think the smart money has seen Josh Greer Jr. struggle in his last few fights,” Sean ‘VIVA’ Gibbons, Plania’s adviser suggested to BoxingScene.com “They look at Magic Mike’s record and see a fighter that is a real sleeper.”

Greer enters the fight riding a 19-fight win streak since an early career loss to Stephen Fulton Jr., now a top-rated 122-pound contender. The 23-year old from Chicago enjoyed a three-win campaign in 2019, all airing live on ESPN platforms which proved to be a blessing and a curse. A knockout win over Giovanni Escaner last February saw Greer climb off the canvas to stop his Filipino foe in the 8th round of a competitive affair.

Decision wins over Nikolai Potapov and Antonio Nieves look good on paper but can represent either valuable learning lessons or the type of fights that revealed his limitation.

The majority decision win over Potapov—which took place last July on an ESPN card in support to a homecoming headliner by Shakur Stevenson in Newark, New Jersey—triggered considerable post-fight debate. A subsequent 10-round win over Nieves last October saw Greer have to survive a late round knockdown in order to prevail in a fight that was much closer than expected to be the case.

Plania suffered his lone career loss in March 2018, dropping a 10-round decision to former bantamweight titlist Juan Carlos Payano. Their bout took place in Hollywood, Florida, in the adopted home region of Payano—a two-time Olympian from Dominican Republic who now lives and trains in Miami. Plania had his say, dropping Payano early before falling behind in the second half of the fight.

Eight straight wins have followed as Plania heads into his first ESPN appearance. The event is the third for Top Rank since its June 9 card served as the first U.S-televised show since March 13, with the sport all but shut down due to the ongoing coronavirus disease (COVID-19) pandemic.

All of the ESPN cards planned for June and July will take place behind closed doors. Still, plenty of eyes will be on Tuesday’s main event—particularly those who find value in the underdog.

“It’s all about timing in life and boxing,” notes Gibbons. “It’s THAT time for “Magic” Mike. Viva Filipino!”

Im actually really looking forward to this bout. I like Greer but his recent struggles are a concern, I think his power and vulnerability make him compelling to watxh. I've never seen Plania but seems the one time he's been…