Davis’ vicious left uppercut knocked Santa Cruz unconscious and rendered the former champion motionless on the canvas for several minutes at Alamodome. A concerned Davis walked across the ring to check on Santa Cruz, but he was quickly ushered away from Santa Cruz’s corner by a Texas commission official to give Santa Cruz room to recover.

Santa Cruz left the ring without assistance, but he was taken to a local hospital for observation following his scary sixth-round knockout loss to Davis.

“I’m just glad I got the victory,” Davis said during a post-fight press conference, “and Leo’s safe and everybody can, you know, go home to their family.” 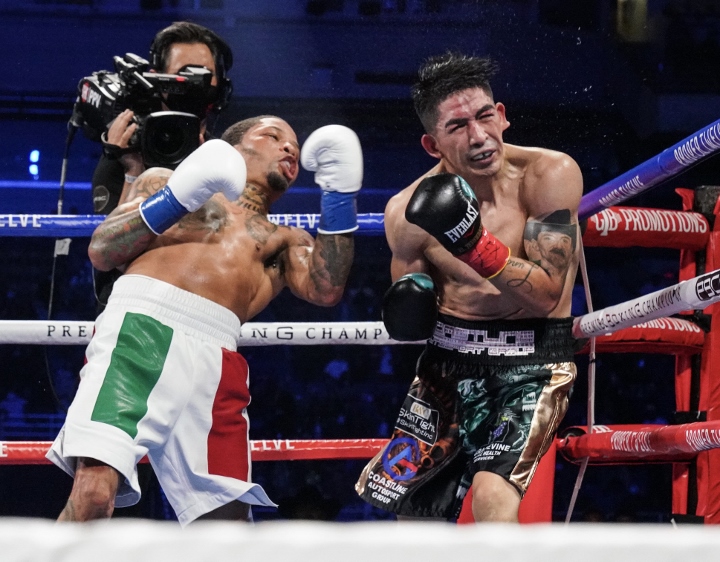 Baltimore’s Davis (24-0, 23 KOs) explained how he felt upon noticing that Santa Cruz was still on the canvas, flat on his back, after absorbing a perfectly executed uppercut that turned around Santa Cruz’s head and knocked him cold.

“When I first him hit, I seen he was going back and I jumped on the rope,” said Davis, who regained the WBA “super” 130-pound championship from Santa Cruz and retained the WBA world 135-pound title. “But when I came back and seen him still on the ground, you know they be on the ground, but some fighters they head, they still be trying to get up. He wasn’t trying to get up. He was just out, so I was just like, ‘Damn!’

“That’s why I started trying to make sure he was OK. You know, we fighters. We go in there with a killer mindset, but at the end of the day, we all have families to go home to. And, you know, we definitely didn’t want nothing crazy to happen to him. And his father just beat a serious situation, so a shout out to his dad.”

Jose Santa Cruz, Leo’s father and trainer, almost succumbed to COVID-19 over the summer. The cancer survivor was hospitalized for a month in June and July, but he recovered, helped his son prepare for the toughest fight of his career and was in his corner Saturday night.

[QUOTE=theface07;20858560]You have to give Davis credit for showing class and respect. [/QUOTE] like hitting people with his car whilst he is drunk? then driving away like a coward?? davis is just an autistic version of broner tbh

I will look for them. If I see it then point taken. Off the bat, I remember Leo going to the body but not straying low.

[QUOTE=Kannabis Kid;20857684]Yeah it's a boxing forum so show some respect for Leo instead of saying he showed up for a paycheck you were talking **** about him.[/QUOTE] He did though. That's how Mayweather lure him into the fight. Give him…

You have to give Davis credit for showing class and respect. The kid is a better person than people give him credit for. He has a lot of negative influences around him including Floyd, yes I said it Floyd, the…