Having served as an integral part of Golden Boy Promotions since its formation in 2002, Eric Gomez has seen the company at its most struggling moments as well as its pinnacle.

The long-term health of the Los Angeles-headquartered promotional outfit is hardly of concern, as much as what was lost out in the short term for some of the rising talent on the roster.

“Look we’re all in the same situation, it’s going to be hard for all of us to make up for everything that was shut down, once everything is back up and running,” Gomez, president of GBP told BoxingScene.com. “Who I really hate it for is our fighters. The ones who had shows lined up, and especially guys like Ryan Garcia and Vergil Ortiz. There were plans in place for them to become breakout stars this year.

“It can still happen, I'm positive they’re still going to have big years. But it’s going to take some adjusting with the (shortened) scheduled.” 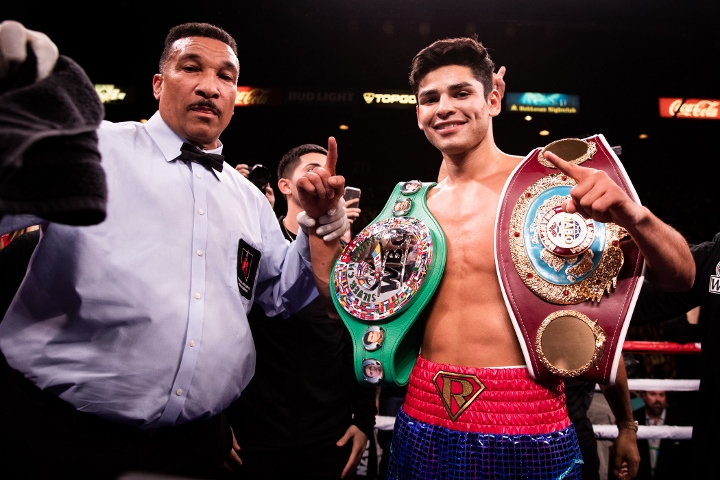 Garcia (20-0, 17KOs) is one of the fortunate ones to have made his way to a ring in the first quarter of 2020. The 21-year old lightweight heartthrob from Victorville, California served as an appropriate headliner for a Valentine’s Day card in front of more than 10,300 at The Pond in Anaheim. Garcia didn’t disappoint, annihilating former two-time title challenger Francisco Fonseca inside of a round in their DAZN headliner.

Six weeks later was to come the 2020 debut of Golden Boy’s stud rising welterweight, Vergil Ortiz Jr. (15-0, 15KOs). The 2019 Prospect of the Year was due to headline a March 28 show at Fantasy Springs Casino in Indio, California, but instead fell prey to the first wave of stateside events to be postponed in the wake of the ongoing coronavirus disease (COVID-19) pandemic.

The bout would have marked the third straight headliner for Ortiz Jr., who instead had to settle for the bittersweet news of heading home to Grand Prairie, Texas in time to celebrate his 22nd birthday.

“Vergil was one of the guys who was so close to making it to fight night and then had to be told it wasn’t happening,” recalls Gomez. “We lost our March 19 show (featuring Joet Gonzalez, Lamont Roach Jr. and Marlen Esparza in separate bouts) and of course the March 28 show that was going to be the first of at least four fights we hoped for Vergil Ortiz Jr. in 2020.

“This fight was going to be a good test against (Samuel Vargas), and from there continue to develop him into a contender. By the end of the year, him and Ryan both we were looking for them to fight for world titles. Right now, we don’t know when anything is going to start up again but we’ve been in touch with all these guys and have discussed the plans moving forward depending on when we’re back to business.”

Golden Boy has managed to squeeze in four shows this year, all on DAZN. Two have come in the form of full production shows on the over-the-top (OTT) streaming service—Garcia’s aforementioned Valentine’s Day card, and Jaime Munguia in his middleweight debut this past January—and two Golden Boy DAZN Fight Night specials, a boxer developmental series which generally airs one Thursday per month.

Three confirmed shows have been wiped clean from the schedule—the March 19 and March 28 cards, along with a loaded April 25 show featuring four major title fights and a light heavyweight headliner between Sergey Kovalev and Sullivan Barrera. The biggest blow was plans for 2019 Fighter of the Year and three-division titlist Saul ‘Canelo’ Alvarez to headline a pre-Cinco de Mayo show May 2 in Las Vegas.

The postponement of all of those shows means fewer events to fill slots for all of the boxers under contract. The silver lining, however, is that it should lead to higher quality shows across the board in the immediate future.

“That’s the thing we are telling our guys is to be prepared for anything,” notes Gomez, who rose from matchmaker to senior vice president to president during nearly his nearly 20-year stay with Golden Boy. “We could see situations where, instead of Munguia and Vergil headlining their own shows, they will be paired up on the same card, which will be a treat for the fans.

“Ryan and Vergil are the two guys we don’t worry about, and there are plenty of other fighters we have like that as well. But those two, they were (poised) to have breakout years this year. That can still happen, we are just continuing to work on getting them there knowing that there will be less time.”

[QUOTE=Califire209;20504785]I don't even know why I'm arguing with a lil bonehead Casual with 0 boxing credibility Lmao[/QUOTE] GET BACK WHEN VERGIL KNOCKS OUT HOOKER AND JESSIE OR REGIS LMFAO... THEN ILL GIVE HIM HIS PROPS... :gives:

[QUOTE=HaymonzPlanet;20502438]OH WOW VICTOR ORTIZ 2.0 KNOCKED OUT A FEW CAB DRIVERS IN DEVASTATING FASHION LMFAOOOO... BUT STILL SCARED TO FIGHT REAL CONTENDERS LIKE HOOKER OR JESSIE HAHAHA.... TRASH :killyou:[/QUOTE] I don't even know why I'm arguing with a lil bonehead…

[QUOTE=HaymonzPlanet;20502907]KIND OF FUNNY THAT TANK IS THE ONLY ONE TO KO PEDRAZA AND HE GETS NOT PROPS! EVEN LOMA COULD NOT KO PEDRAZA! TANK DID IT WHEN PEDRAZA WAS A UNDEFEATED CHAMP! :usa:[/QUOTE] I think Tank is a great talent…

[quote=boloshot;20502448]it was spence's 16th fight and vargas had one loss at the time but his resumé was also even worse. It's a nothing fight for either man, just filler.[/quote] hopefully after sammie they will step up vergils competition

[QUOTE=BoloShot;20502453]Ah now Ortiz knocked out Mauricio Herrera, Antonio Orozco and Brad Solomon. None of those are bums but not great either but he is the only guy to have knocked any of them out. They're stepping stones and Ortiz has…