Barclays Center, Brooklyn, New York - In the co-feature, WBC Featherweight World Champion Gary Russell Jr. (30-1, 18 KOs) put on yet another professional display to defend his belt for the fourth time against a valiant Kiko Martinez (39-9-2, 28 KOs).

Due to a gash that opened up over Martinez's left eye, referee Ricky Gonzalez stopped the fight in the fifth round upon the advice of the ringside physician, resulting in a technical knockout.

Russell, who was fighting for the first time in a year, showed no signs of ring rust and displayed his full skillset including his trademark lightning quick hands. The 30-year-old Capitol Heights, Md. native was dominant from the opening bell and landed on a remarkable 40% of his power punches. 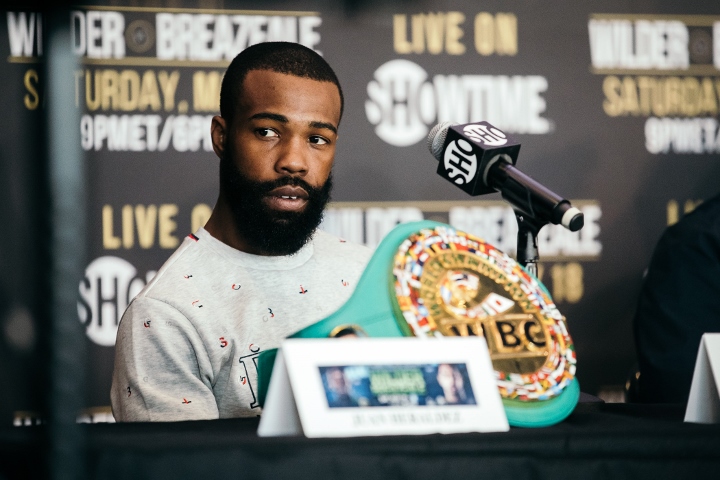 In an all-action fight with little downtime, Martinez did more than enough to play his part. The Spaniard constantly came forward but Russell continued to target the cut that opened up over his eye after a right hook in the second round. The ringside official called for the stoppage of the fight at 2:52 of round number five.

"I did pretty good," said the 2008 U.S. Olympian Russell to SHOWTIME ringside reporter Jim Gray. "We stayed behind the jab and he couldn't get past it.  We knew that intellect over athleticism would get it done.

After the fight, Russell put a target on the back of fellow champion Leo Santa Cruz - and called on their mutual manager, Al Haymon, to make their fight happen next.

"We want to make this fight happen.  The fire is all the way hot on this side of the field.  You will get burned.  I would love for that fight to happen this year. Let's make it happen."

[QUOTE=Bronx2245;19757659]That can't be true, because Haymon would've blocked Jacobs vs. GGG on HBO, and blocked Jacobs vs. Canelo on DAZN! No way would Haymon allow Jacobs to sign with Hearn and go to another platform! LMAO![/QUOTE] Pretty sure you are…

I got Gary Russell going to DAZN to fight farmer first before he gets Leo or Davis... specially Davis...

Dont get injured when the fight gets the green light

Russell thinks he’s the s**t for beating someone years after Leo Santa Cruz did, lmao. Santa Cruz ain’t nothing special but he’d absolutely buttf**k Russell. Russell is on a strictly bum diet and only once a year, LMAO. Santa Cruz…

[QUOTE=deanrw;19758285]Sent you green. I still believe that athleticism is hard to beat even if you got all the skills in the world. Think Toney vs Jones Jr.. Toney is as gifted as you will find, but he had no answer…