The opponent Russell most hopes to face, however, is Vasiliy Lomachenko. Russell suffered the only loss of his professional career to Lomachenko, who won a majority decision over the WBC featherweight champion in June 2014.

Ukraine’s Lomachenko beat Russell in just the two-time Olympic gold medalist’s third bout as a pro. Lomachenko (13-1, 10 KOs) since has advanced to the lightweight limit of 135 pounds, two weight classes above Russell’s division. 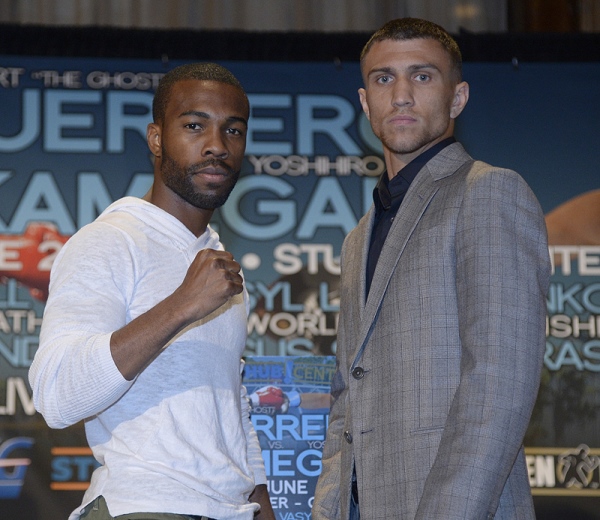 Russell, 30, is willing to move up to meet Lomachenko at a catch weight between 130 and 135 pounds if Lomachenko agrees to grant him a second chance.

“Most of my fights are not personal; it’s just business. We do it to provide a sense of financial stability for our families, etc. But that particular fight is personal. That one has added incentive to it, so I would definitely be willing to move up two weight classes to make that fight happen. I’ll meet him. I’ll meet his ass there.”

As focused as Russell appears on overcoming Martinez, his majority-decision defeat to Lomachenko nearly five years ago still stings. When it was mentioned that he and Lomachenko fight at the same elite level, Russell disagreed.

“I doubt that me and Lomachenko are at the same level,” Russell said. “He don’t do the sh*t in the ring that I do in the ring. He don’t give you the hand speed and the boxing IQ I give in the ring. He does a lot of moving around with his feet and running and stuff like that. Nobody knew who the f*ck Lomachenko was until he fought Mr. Gary Russell Jr.

“You can’t take away from what he did in the amateurs, but in the pros, he lost to [Orlando] Salido. No one knew who he was until he fought a dehydrated, 5½-pounds-overweight that I had to lose the day of the fight, Gary Russell Jr. So nah, I don’t think that Lomachenko is even on my level.”

Russell is much more likely to face Santa Cruz (36-1-1, 19 KOs), the WBA featherweight champ, than Lomachenko in his next bout. Lomachenko, who owns the WBA and WBO 135-pound titles, is headed for a fight against England’s Luke Campbell (20-2, 16 KOs) for the vacant WBC lightweight championship.

Worry about the fight that can be made , Here you go HIM DIED— Gervonta Davis (@Gervontaa) May 19, 2019 And AL knew what he was doing…

[QUOTE=kushking;19753786]I gave up on ever defending mikey if he stupidly insists on fighting no win cashout exploitation fights like he seems intent on doing. No doubt lomas a p4p fighter (because he has 2 good wins which is more than…