Not only was Yuriorkis Gamboa already a heavy betting underdog ahead of his lightweight clash with Gervonta Davis, but literally handicapped for much of their clash.

The 2004 Olympic Gold medalist and former featherweight titlist was officially diagnosed with a complete tear and retraction of his right Achilles tendon, according to a medical report from earlier this month. Gamboa fought for more than 10 rounds essentially on one good ankle in an eventual 12th round stoppage defeat to the unbeaten Davis in their Showtime headliner last December in Atlanta, Georgia.

“There is heterogeneous signal intensity and areas of increased signal intensity with the talus,” Dr. Eric M. Godreau stated in a medical report from an MRI examination conducted on January 9 in Miami, where Gamboa has been based since defecting from Cuba in 2006. “A cortical fracture is not identified, however cannot totally be excluded.

“The talor dome is intact. No subchondral bone defects are seen. There is a complete tear through the Achilles tendon with associated retraction of approximately 3.0 cm. Generalized soft tissue edema within this region is noted. The distal tibia and fibula are unremarkable. The plantaris tendon is unremarkable.” 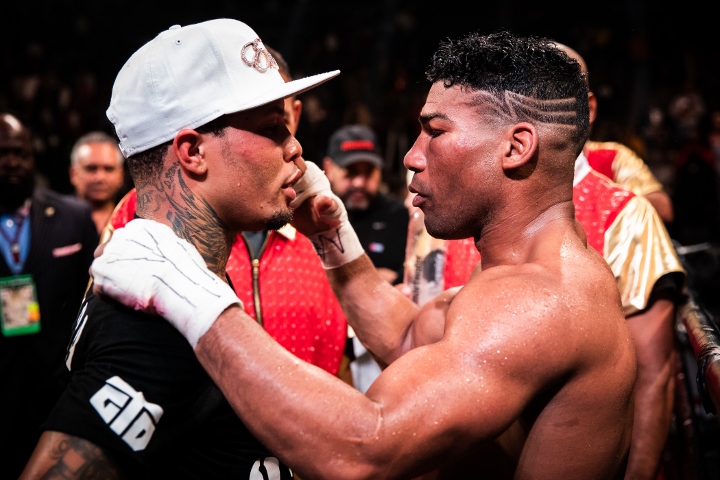 Gamboa (30-3, 18KOs) began complaining of discomfort to his right ankle while making his way back to his corner after the 2nd round, following the first of three knockdowns suffered on the night. Subsequent rounds saw the 38-year old awkwardly paw at his right leg, with speculation all over the place as to the nature of his injury. Some had falsely suggested something as trivial as a shoe malfunction, although his inability to leave the arena on his own two feet indicated far greater damage.

All that the one-time prodigious talent could do was fight through pain and adversity, surprisingly lasting until the 12th round given the circumstances before a 3rd and final knockdown on the night prompted referee Jack Reiss to stop the contest.

Two weeks later has come what can at least land as a moral victory, though in the form of more bad news as the diagnosis will result in a lengthy layoff as Gamboa recovers.

“Heterogeneous signal intensity within the talus may represent a bone bruise, however the possibility of a fracture cannot be totally excluded,” Dr. Godreau offered in his medical summary. “Complete tear and retraction of the Achilles tendon as described above with surrounding edema.”

It was a disappointing night to what Gamboa had hoped to be a massive comeback year. Four straight wins preceded his second bid at a lightweight title, having suffered a 9th round stoppage at the hands of Terence Crawford when both boasted identical records of 23-0 (17KOs) heading into their June 2014 clash.

Gamboa was also stopped in seven rounds by veteran spoiler Robinson Castellanos in a May 2017 upset, though bouncing back with 10-round wins over Alexis Reyes and Jason Sosa [the latter in controversial fashion] before sitting out most of 2018. A cult-level celebrated return came in November 2018, as Gamboa outpointed Miguel Beltran Jr. on a show that also included former two-division titlist Juan Manuel Lopez, carrying the tease of a well-past-sell-date showdown between the two.

Instead came a path that led to a showdown with Davis (23-0, 22KOs) for a secondary lightweight title. Both appeared on the same show last July, with Gamboa scoring a 2nd round knockout of former 130-pound titlist Roman Martinez in the supporting bout to Davis’ homecoming knockout win over Ricardo Nuñez in Baltimore. The show aired live on Showtime, with the wins setting up a head-on collision.

Given the circumstances, the hope at least on this side of the equation is a chance to do it again in 2020.

"My injury sustained in the [2nd] round...complete tear (grade 3) verified as per MRI and board certified Dr,” Gamboa stated through his verified social media account on Monday, a note which was accompanied by an image of the official medical report. “I went 12 with Davis and did my best under the circumstances.

[QUOTE=martin_1995;20325005]Just face it, tank is not a great boxer, as simple as that.[/QUOTE] His power is also diminished at 135. Throw him in with that young Japanese fighter that walked through Lopez's best shots and Davis would have the fight…

Just face it, tank is not a great boxer, as simple as that.

[QUOTE=_Maxi;20324107]You were answered by someone else above... dude, you should change your nickname to: "BoxingIsGreatButIamStupid".[/QUOTE] We are done. Peace, bro.