There wasn’t much that Gabriel Flores could do to upstage a fight week that already included his 19th birthday, receiving the key to the city of Stockton, Calif. and being honored by the NBA “G” League Stockton Kings.

Stockton’s own Flores delivered a performance well worth the raucous cheers of more than 10,000 in attendance, stopping Brazil’s Eduardo “La Dinamita” Pereira dos Reis in the 3rd round of their ESPN-televised special attraction Saturday evening at the Stockton Arena.

“It felt amazing. This is where I was born and raised and this is what I worked for,” said Flores, who has previously fought in other parts of California’s Central Valley but who played his hometown for the first time in his young career.

Boy, did he deliver. 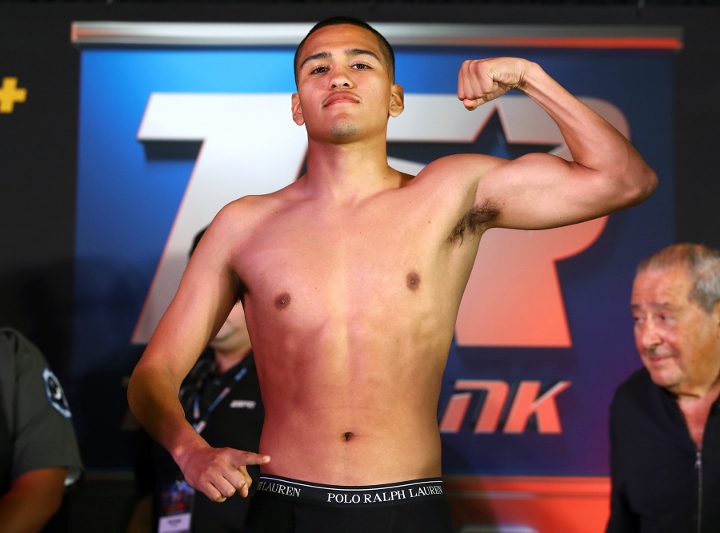 Flores’ bout came on a show that featured two major title fights, but there wasn’t any question as to the evening’s star attraction. So much, that the brass at Top Rank wisely inserted his bout as the evening’s co-feature, ahead of Jerwin Ancajas’ super flyweight title-defending stoppage win over Ryuichi Funai which opened the ESPN telecast.

Pereira spent the entire night on the defensive, clueless as to how to defend against Flores’ blistering hand speed. The visiting opponent from Brazil walked forward behind a high defensive guard but did little to pick off the rapid fire combinations from Flores, who landed 23 punches in the opening round.

Chants of “209” (the local area code) filled the arena, with Flores eager to deliver an ending to remember. It wouldn’t quite come in round two, although a frame that saw the local favorite slowly chip away at the more experienced but hopelessly overmatched Pereira.

Then he saw an opening to end the fight, boom went La Dinamita.

Flores used constant lateral movement to keep Pereira (23-6, 19KOs) off rhythm for much of the brief affair. Once he saw his opponent pivot in the wrong direction, the teenaged prospect stopped just long enough to plant a left hook flush on his chin.

Pereira was out upon impact, prompting referee Marcos Rosales to wave off the contest without even bothering to issue a count.

The official time was 1:14 of round three.

“I saw he wasn’t going to be able to follow me around the ring all night,” insisted Flores, who picked up his first knockout win in 14 months, having racked up six straight decision wins in between. “Once I seen he tried to follow me, left hook, boom, lights out.”

Earlier in fight week, Flores—who turned 19 on Wednesday and was also issued a key to the city by Mayor Michael Tibbs—was presented with a mock championship belt by the Stockton Kings, in their purple and black team colors and with “209” engraved in the center.

It will be a couple of years before the rising prospect figures to fight for a major title of his own, so this will be the one he carries around in the interim.

“This belt represents my city,” Flores proudly stated afterward. “I’m the people’s champion. When I got the city on my back, can’t nobody touch me.”

His latest ring result proves that much, with more than 10,000 witnesses to testify.

The Stockton crowd was HOT for this fight. Wow. This guy can become like another Crawford in Omaha or Jose Ramirez in Fresno.