Gabe Rosado: After I KO This Clown Arias, I Want The Best at 160

A crossroads middleweight scrap was announced this past Saturday, and takes place on November 17th at the Kansas Star Arena and Casino in Mulvane, Kansas. The bout will be streamed live on DAZN.

Luis Arias (18-1, 9KOs) is back in action, attempting to jump start his career after suffering his first career defeat. Arias was dominated over twelve rounds in November of 2017, by current IBF middleweight champion Daniel Jacobs.

And he's up against a very rugged veteran in Gabe Rosado (24-11, 14KOs), who returns for the first time since October 2017, when he stopped Glen Tapia in Las Vegas. 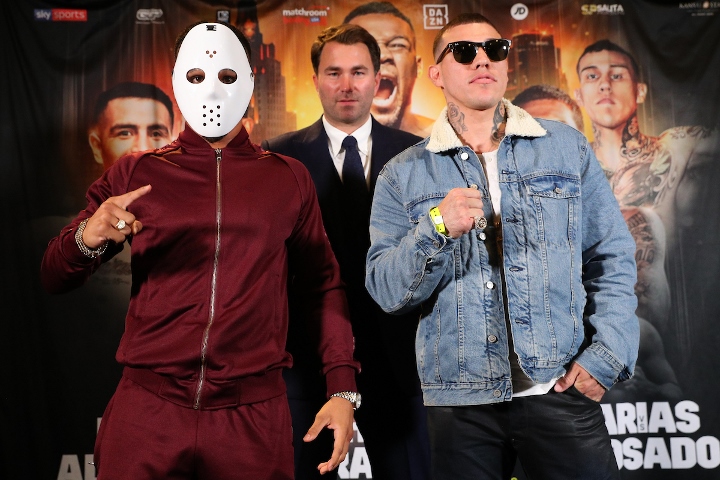 Rosado has faced the very best in his career - including Gennady Golovkin, David Lemieux, Jermell Charlo, Peter Quillin, and several others.

He plans to make an example of Arias.

"It's been a long time since my last fight but in that time, I’ve been able to re-group, focus, get back with my original trainer and I'm looking forward to this opportunity. Luis has said a lot about my losses, but win, lose or draw, everybody respects me," Arias said.

He ran in his last fight, remember that. He doesn't know what he's got coming. I like that all the middleweight titles are with DAZN - congratulations to Demetrius Andrade for his win, that's a fight I'd love, Danny Jacobs too and Canelo – I want to smash this clown and then meet the top middleweights."

But Arias, who is not one to stay quiet, believes Rosado has nothing in his arsenal that can help him in this fight.

"Losses are over-rated - unless you have 11 of them like Gabe has - it's about who you fight. I took a chance in my last fight against Daniel Jacobs, I had the opportunity to skip the line and jump into the mix with the top guys," Arias said.

"Even though it was the worst performance of my life, I fell short, you take the best out of the situation. I was able to go 12 rounds on one foot with a top guy. I know what kind of fighter Gabe is and what kind of fight this will be, he'll bring it. I asked for this fight when I was 10-0 and honestly, his chances of beating me would have been better back then."

"I'm stronger, I'm in my prime, and there’s nothing he can bring that can hurt me, that I haven't seen. I know he's tough, I've seen more of him than he has of me and we're going to steal the show."

Complete garbage on the Suck Zone

i dont ever wanna see gabe after that fight vs monroe, couldnt do a god damn thing

[QUOTE=vitali1999;19234670]Says the guy with 11 loses fighting a feather fisted dancing, run decision prick. This should be a Mayweather lovers dream fight. Rofl. Not for me[/QUOTE] Loses are over rated.