Gabe Rosado: Freddie Roach Just Brings The Best Out Of Me

With nearly 15 years in the pro ranks and the losses beginning to pile up, Gabriel Rosado was able to recognize that changed were needed if he had any chance of extending his pro career.

Depending on the viewpoint, Philadelphia’s Rosado is either at the make-or-break point or has long ago passed that threshold and merely serves as cannon fodder in present time. Naturally, the veteran gatekeeper believes he still has plenty to offer the sport, so much that the 34-year old is willing to endure the daily rigor that comes with left spent under the tutelage of Hall of Fame trainer Freddie Roach.

"Freddie just brings the best out of me,” Rosado noted during Wednesday’s pre-fight press conference for his upcoming grudge match versus Daniel Jacobs this Friday on DAZN. “Great camp, very knowledgeable, just straight down to business. It’s just what I need.” 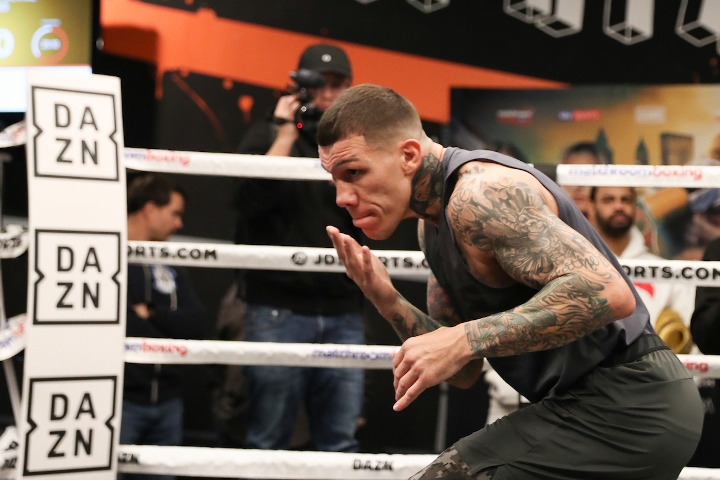 Rosado joined forces with the multi-time Trainer of the Year last year, looking to revive his career after having won just three of his previous 12 starts (3-7-1 with 1 No-Contest) to that point. Some were hard luck decisions, others well-deserved; none were enough to convince Rosado of his perceived place in the sport; rather, the means in which he was preparing for such fights.

“Maybe in the past I was dictating a little too much of my camp,” admits Rosado, who is now based out of Los Angeles. “Freddie’s the boss. Whatever he says, I do.”

Rosado enters on the heels of a 10-round decision win over Humberto Gutierrez last December in Phoenix, Arizona. The feat came as the literal walkout bout, with the Talking Stick Resort Arena cleared out due to a post-fight riot caused in Jacobs’ 5th round stoppage win over Julio Cesar Chavez Jr. in the main event.

The pre-fight buildup included plenty of trash talk, as Rosado was assigned to the show as a failsafe in the event Chavez Jr.—his then-training stablemate—was unable to fight. His place on the card was used as leverage by Jacobs to extract a bigger payday out of Chavez Jr. who was never going to come close to make the contracted super middleweight limit.

The development was only a small part of the developing feud between the two, ultimately resulting in a head-on collision this weekend. Jacobs—a former middleweight titlist—insists that Rosado should celebrate the Thanksgiving holiday expressing thanks to an opportunity he didn’t need to provide.

Such a viewpoint or outlook on his own career isn’t at all shared by the self-described rejuvenated underdog.

“It’s just my self-belief, my confidence. It’s about knowing that I’m willing to do whatever it takes,” insists Rosado. “I don’t think [Jacobs has] got that in him. I know whatever he’s gonna bring to the table isn’t nothing that I haven’t already seen. I feel at this stage of my career, I’m experienced, I’ve had a great camp and I’m locked in.”

Gabe Rosado imo is the definition of a talented boxer whos best was wasted being loyal to the wrong trainer. He had this weirdo trainer who didn't know [I]s[/I] hit about boxing training him for the majority of his career.…

Rosado can sell a fight but damn after the GGG loss he was done, 12 losses now.

I’ve always liked Rosado so I’m hoping he can surprise here....but I’m not holding out a lot of hope

[QUOTE=hitmanjosh;20912022]Freddie will make top dollar and be able to use Rosado as a sparring partner for his real fighters, can’t lose situation![/QUOTE] I’m quite certain given Roach’s Parkinson’s condition, quite possibly caused by the repeated blows to the head the…

Freddie will make top dollar and be able to use Rosado as a sparring partner for his real fighters, can’t lose situation!