Fury's Coach: Mayweather Left Arena Disgusted - That Says It All

By Warren Muggleton, courtesy of The Daily Star

The Gypsy King dominated the early rounds but two knockouts from the American brought him back into contention. 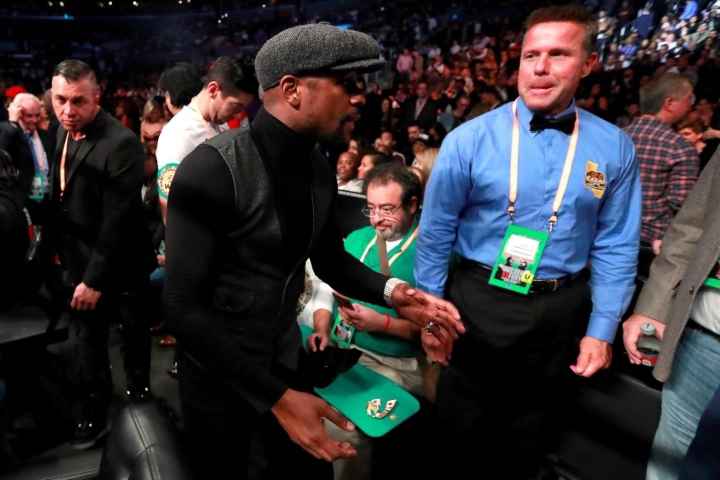 This left fans of the Gypsy King furious, venting their anger on Twitter.

But no-one was more angry than Ben Davison, Fury’s coach, who suggested the judges had taken away a special moment.

Speaking on BBC Radio 5Live, he said: “Floyd Mayweather’s walked out of this arena disgusted, that says it all.

“To take something away from someone that’s come from hell and back, to ruin the biggest comeback in boxing history, probably in sports history, that is a disgrace.

“To do that to somebody, what sort of sick people have you got to be? I think you’ve got to be a sick person to do that as someone who knows Tyson’s story”

The trainer went on to suggest there was some unfair treatment.

“I think you’ve got to be a sick person to do that as someone who knows Tyson’s story,” Davison added.

“Everyone in boxing knows Tyson’s story. We weren’t asking for any bias. We wanted a fair crack at the whip. That’s all we asked for from start to finish and we haven’t got that.”

And Davison was not the only one stunned by the decision.

“There should be an inquiry and the judge that scored for Wilder should be sacked.”

While a third suggested the draw affected the sport as a whole.

“This was a shocking result for boxing,” they said.

[QUOTE=Bonduu;19332004]I think AJ is far the more all round boxer and would knock a small leaner Wilder once he connects. We all saw how Fury exposed Wilder’s right and AJ would have watched and taken notes...Wilder really got exposed and…

[QUOTE=apollocreed;19325013]What? No, Joshua hits hard. I never said he didn't. His power and strength are what he has going for him. However his boxing skill level is basic. He's very easy to hit, as Klitchko and Povetkin showed. When Wilder…

[QUOTE=Bonduu;19324662]You all think Joshua hits like a girl right? How about if Josh hits first? Even tot of that fan boy?[/QUOTE] What? No, Joshua hits hard. I never said he didn't. His power and strength are what he has going…

[QUOTE=apollocreed;19321874]When Joshua gets hit hard by Wilder, he would not be getting up like Fury. He's also much easier to hit than Fury, he has slow footwork, no head movement and a basic defense.[/QUOTE] You all think Joshua hits like…

[QUOTE=Nusky;19323948]Yes, jealousy mate. Believe it or not a lot of these big bad tough world class fighters have female tendencies/qualities. They try to hide it but it shows in there twitter comments, the biased way they judge fights amd their…