Fury's Coach: I Believe Wilder is Most Dangerous Fighter Out There

TYSON FURY has entered the WBC heavyweight rankings at number five, increasing speculation that he will meet champion Deontay Wilder before the end of the year.

But Fury’s trainer, Ben Davison, insists they are concentrating on the job at hand, which is to first defeat Francesco Piantea in style when they clash in Belfast on August 18.

Davison was pleased with the WBC’s move, but is not getting ahead of himself.

“It’s all good news,” he said. “It’s all good stuff. To be honest, you’ve got to take one fight at a time and we’ve got Francesco Pianeta ahead of us and that’s what we’re focused on at the minute. Everything else is non-existent.” 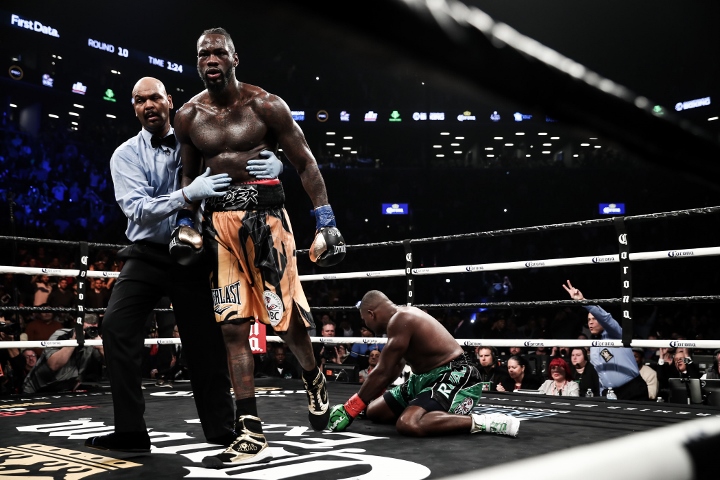 The 33-year-old Germany-based Italian is looking to scupper one of the biggest fights of the year, but Ben believes his man is experienced enough not to look beyond next Saturday.

“It can be [a distraction] if you’re not in the right frame of mind but Tyson has been in a similar situation before,” Davison explained. “If you remember when he boxed Christian Hammer it was a similar situation with the Klitschko fight around the corner – so he’s been there. He’s done it. He knows what he’s got to do.”

Fury, 29, returned in a rust-shedding bout against outgunned Sefer Seferi in June and appears to be in an ever-improving physical condition having lost around eight stone.

“People comment on Tyson’s shape aesthetically but that’s going to take time and he’s in much better shape now and I’m looking for nothing short of an exceptional performance,” Davison added.

“Tyson just needs to do what he does. He’s a slick boxer. He needs to go out there, put a showcase on with his boxing skills and that will be a statement in itself. And how it unfolds is how it unfolds. I do believe that Tyson will break Pianeta down bit by bit, starting off behind his boxing and I think when he starts landing flush shots on Pianeta I don’t think he will be able to hold them, as the rest of the opponents haven’t been able to.”

They fly to Northern Ireland on Monday for fight week where Davison said it will be “all business in Belfast.”

He had originally planned on his fighter having several comeback bouts before testing himself against the best, but the Wilder fight seems to be there for the taking.

“You can only take it step by step,” Davison admitted. “To be honest, I don’t get too involved in things when we’ve got something set out in front of us. I don’t like to hold the conversations about it. We don’t hold the conversations about it between ourselves at the minute. I said to him we will chat about it after Pianeta. We’ve got a job to do at first but you cannot overlook anybody, especially in the heavyweight division.”

The gap between Pianeta to Wilder is enormous and it’s something Davison acknowledges.

[QUOTE=P4Pdunny;19011780]Fury can’t survive if he gets hurt by Wilder. The onslaught will be too much. I’ve always liked Wilder. When I saw him hurt Ortiz who retaliated and almost had Wilder out of there to withstand that and then win…

So WBC has Fury ranked 5th? How did he get there? By fighting Seferi?

[QUOTE=Boxing1012;19011400]And if he tags him and hurts/drops him how can Fury survive it? I can't think of anyone who Wilder didn't KO once he had them hurt (except for being saved by the bell), he is a great finisher. I…

This is very telling . Fury is supposedly almost finished with a Wilder fight yet in this very article Davison says he has not talked to Fury about it and wont until after Pianeta ? Ive never heard of a…

[QUOTE=P4Pdunny;19008480]Wilder will have trouble with Furys movement, speed and general awkwardness to begin with. I just can’t see how Fury escapes that fight without being put to the ground though. I can see Wilder tagging him.[/QUOTE] And if he tags…