Fury: This Is Not A Racial War, It's Two Heavyweights Going Toe-To-Toe

A master of self-promotion, Tyson Fury has shown a flair for grasping a wide range of topics. The one discussion he can’t quite wrap his head around, however, is how the subject of race has entered his two-fight set with Deontay Wilder.

The matter has come up in the buildup to their anticipated title fight rematch which takes place this weekend at MGM Grand Garden Arena in Las Vegas (Saturday, Pay-Per-View, 9:00pm ET). Alabama’s Wilder (42-0-1, 41KOs) has made a point to shed light on the event taking place during Black History Month. The defending heavyweight titlist went as far as to guarantee that the night will end with his longtime unbeaten rival being reduced to an answer to a Black History trivia question.

It’s a rare occasion where Fury—while never at a loss for words—is neither interested in debating the subject, nor caring to understand how it was ever introduced in the first place.

“I'm not so sure there was racism in the first fight. I certainly didn't say any of it,” England’s Fury (29-0-1, 20KOs) told Fox Sports’ Speak For Yourself host Jason Whitlock after Wednesday’s final pre-fight conference for this weekend’s main event. “We're all human beings. It doesn't matter if you're black, white, pink or green. We all share the same blood. We are human.

“This fight isn't a racial war between blacks and whites. This is a fight between the two most high-performance heavyweights on the planet. There's nothing racial about this fight. I have nothing against Deontay Wilder as a man. He has nothing against me as a man. But as two fighters, we really want to give it to each other.” 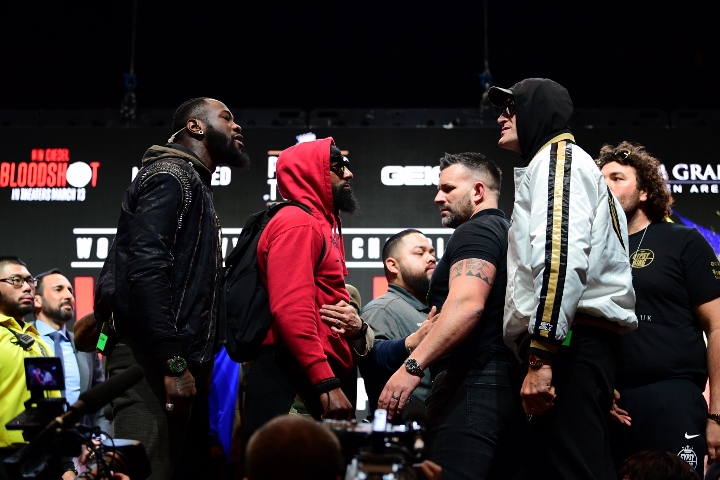 The subject’s origin stems from the pre-fight build-up to the first fight, in which Fury and Wilder ultimately fought to a 12-round draw. At some point during fight week, Fury drew attention to the centuries-long discrimination against the Travelling community, as he and his family are Irish Travellers. It was mentioned merely to shed light on that aspect of his life and how his people have spent the past 200 years combating inequality and social injustice, not to compare to the suffering of anyone else.

It’s a statistic that was met without sympathy from Wilder. The reigning heavyweight titlist—who now attempts his 11th defense this weekend—made a point to repeatedly reference the history of racism in America dating back to the United States’ participation in the slave trade. Even with the abolishment of slavery, not nearly enough change has come more than 150 years later. Wilder’s passionate response came complete with his ‘Till This Day’ outburst still remains relevant in boxing circle and African-American culture.

It can be respected without having to warrant a response.

“I'm not reading into this racial thing, with a black man versus a white man and Black History Month,” Fury insisted during Wednesday’s final pre-fight main event press conference. “I will refuse to go into any sort of thing about it. We are two heavyweights, two human beings.

“This is not a racial war, this is two heavyweights going toe-to-toe for all the jewels in the heavyweight division.”

[QUOTE=Idunnoshet;20403451]You must've misunderstood. The ones I was referring to that were knowledgeable with a good vibe were the Brits. My girl , myself and the couple next to us were cheering Wilder. The Brits in front of us were cheering…

[QUOTE=JTfloyd;20403819]Actual instances of racism are few and far between in America, which is why the media (in this case, the person who asked that ridiculous question) tries to pin that label or equate the topic to ANYTHING, in order to…

[QUOTE=STREET CLEANER;20402179]About the only rational thing that Tyson has said.[/QUOTE] Yep agree! Rest of what he said can be summed up by After last fight : "Wilder hits the hardest of all heavyweights including Klitchsko" Before this fight "Klitchsko hits…

Actual instances of racism are few and far between in America, which is why the media (in this case, the person who asked that ridiculous question) tries to pin that label or equate the topic to ANYTHING, in order to…