Fury: Schwarz Knows If He Beats Me Becomes Multi-Millionaire

The former heavyweight champion never truly cashed in on his own upset of Wladimir Klitschko in November 2015 because an array of personal problems forced Fury to give up the IBF, IBO, WBA and WBO titles before he could defend those belts against Klitschko in an immediate rematch. Now that he’s in position to land another heavyweight championship rematch with WBC champ Deontay Wilder, Fury isn’t about to miss out on that type of opportunity again. 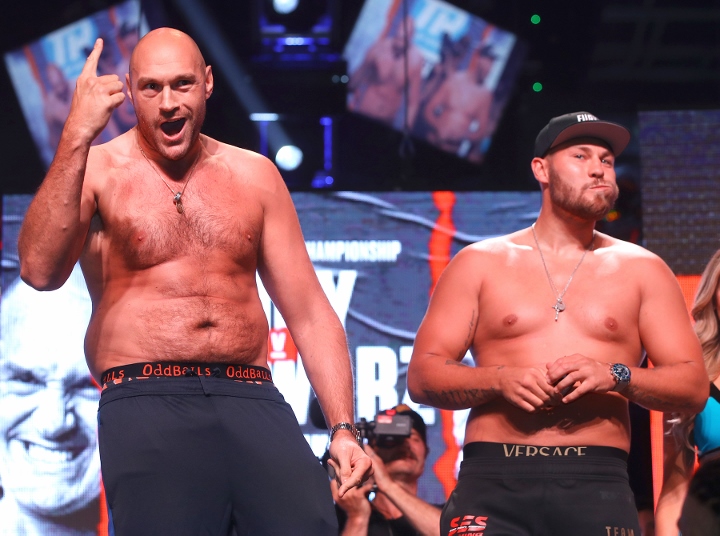 Fury referred to Wilder’s announcement on social media May 31 regarding he and Fury having an agreement in place for a rematch early in 2020. For that to happen, Fury would have to beat Schwarz and another undetermined opponent later this year and Wilder (41-0-1, 40 KOs) would need to defeat Luis Ortiz (31-1, 26 KOs, 2 NC) in their rematch either in October or November.

“They’re all good fights,” Fury said. “Any fights the Gypsy King’s involved in is a good fight. And as we saw last week [with Ruiz-Joshua], you can’t overlook anybody. This is heavyweight boxing. And Tom Schwarz knows if he beats Tyson Fury, then he’s set for life. He becomes a multi-millionaire, he gets to headline big shows and all his dreams come true. So, am I gonna underestimate a guy like that? I don’t think so. Not at all.”

[QUOTE=Iron Fister;19833793]The have to build up the next great white hype or saviour of British boxing...take your pick. Fury is going to crash and burn in the most epic manner. Fake lineal champion drug cheat.[/QUOTE] How do you explain the…

Tyson Fury is the heavyweight boxing version of Connor McGregor.

Fury is such a cringy idiot. Fat Fury can't sell any tickets, how can he make anyone a millionaire?

Fury's bravado+bipolarity mask the personality of a coward. He needs psychoanalysis for genuine insight into himself+longterm recovery. That said, he is a boring boxer who can learn from brave boxers of past (foreman, Ali, Lewis, Duran, hagler, sray Leonard, tyson..etc.…

[QUOTE=Iron Fister;19833793] Fury is going to crash and burn in the most epic manner. Fake lineal champion drug cheat.[/QUOTE] That would really make your day wouldn't it? Nice to wish that on another man. I suppose it'd make you feel…