Tyson Fury feels his rematch against Deontay Wilder on Saturday night is bigger than those fights. The ever-confident Fury went as far Tuesday as to call their second showdown for Wilder’s WBC title the biggest heavyweight fight since legendary rivals Muhammad Ali and Joe Frazier squared off for the first time in what was billed as “The Fight of the Century” nearly 49 years ago.

Ali was 31-0 and Frazier was 26-0 when Frazier defeated Ali by unanimous decision in a 15-round battle to win the WBA and WBC heavyweight titles in March 1971 at Madison Square Garden in New York.

“I don’t recall the heavyweight division being so exciting since the 1970s,” Fury told a group of reporters after his “grand arrival” at MGM Grand. “And this, me and Wilder, is gonna be the biggest fight since 1971, since the last time two undefeated heavyweight champions fought each other. That was Muhammad Ali and Joe Frazier, 1971. So, it’s took a while, nearly 50 years to get another massive fight like that. So, I’m really looking forward to it. We’re gonna put on a fantastic show. And we’re setting the world on fire, that’s for sure.” 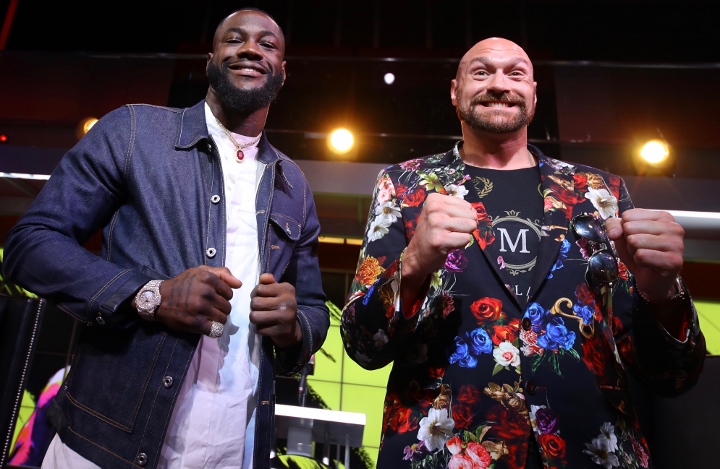 The Wilder-Fury rematch has benefited from an expansive promotional push by FOX Sports and ESPN, networks that are available in nearly 120 million and 83 million American homes, respectively.

Their first fight, a controversial split draw that was distributed by Showtime, reportedly produced approximately 325,000 buys in December 2018. Pay-per-view projections for their rematch vary, but tickets remain available for the show Wilder (42-0-1, 41 KOs) and Fury (29-0-1, 20 KOs) will headline at MGM Grand Garden Arena.

Joshua-Klitschko, an epic encounter England’s Joshua won by 11th-round technical knockout, drew a capacity crowd in excess of 90,000 to London’s Wembley Stadium in April 2017. That fight aired live on Showtime in the United States and was replayed the same night by HBO.

Lewis-Tyson, which was promoted as the biggest heavyweight fight since Ali-Frazier, cost a then-unprecedented $54.95 on pay-per-view in the United States. The suggested retail price to watch the Wilder-Fury rematch in the U.S. is $79.99.

Ali-Frazier drew a capacity crowd of 20,455 to Madison Square Garden. The first fight of their trilogy reportedly was watched live by 300 million people combined in roughly 50 countries, many at closed circuit locations.

They tryin HARD to sell this fight as a "cant miss" event. Yawn...

When I think of the biggest HW fights in the past 50 years, I’m sorry, I can’t go with 1 fighter in his ultimate prime and the other isn’t. With Lennox Lewis vs Mike Tyson, that wasn’t Iron Mike. He…

Back on the meds brother, Ali-Frazier 1? Xanax, Prozac, take a few of each then go jerk off 7 times..

Off the top of my head... Not bigger than Lewis vs Tyson, bowe vs holyfield 1-3, holyfield vs Lewis 1&2, Holmes vs Cooney,

I know zillions of guys — extended family dudes, clients, husbands of my wife’s friends — who are sports fans (college and pro football and basketball especially) who have no idea there’s a heavyweight fight coming up. Why? Because boxing…