Fury: Ortiz Is 49 Years Old, Wilder Does Him Inside Of Six Rounds!

If there’s any lesson learned by Tyson Fury during the darkest period of his life, it’s to focus more on what he can control than what’s happening around him.

The unbeaten heavyweight from England continues his jolly old comeback tour, fighting for the fifth time in 15 months when he faces Sweden’s Otto Wallin on Sept. 14 in Las Vegas, Nevada. The ESPN+ streamed bout will be his second since signing with Top Rank and ESPN earlier this year, following a three-fight clip in six months last year after a 31-month hiatus with drugs, alcohol and mental health issues disrupting his World heavyweight championship reign.

“It keeps me mentally focused,” Fury told ESPN’s Mark Kriegel of his desire to remain active, while on site for the network’s live telecast Saturday evening at Banc of California Stadium in Los Angeles. “One thing I know is, once I have something in the pipeline, it keeps me focused. 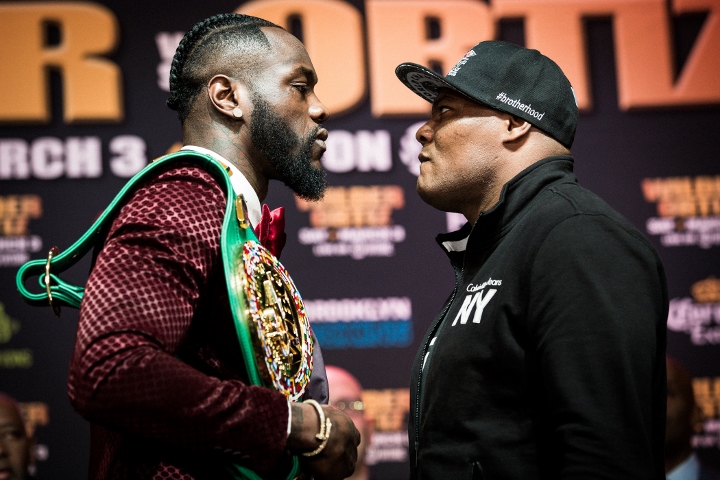 The 2019 run comes all while leaving behind a nearly-finalized rematch with Deontay Wilder. Interestingly, such a fight is back on the table, with Fury himself insisting it will happen on Feb. 22, also in Las Vegas. The two collided last December at Staples Center in Los Angeles, Calif., with Fury overcoming two late knockdowns to otherwise outbox Wilder, only to have to settle for a widely disputed 12-round draw.

Wilder has fought just one round since then, an iconic 1st round knockout of Dominic Breazeale this past May in Brooklyn, New York. A Feb. 22 date for their rematch would put the pressure on Wilder to turn around just 13 weeks after his long-discussed but not-yet-official rematch with Luis Ortiz, which is targeted for Nov. 23 in Las Vegas.

Many in the industry remain skeptical of the timeline, as well as any chance of Wilder losing to Ortiz in their rematch later this year. Their first fight last March saw Wilder legitimately hurt midway through the bout before rallying to drop and eventually stop Ortiz in 10 rounds.

Their bout was one of the best of 2018, but also appeared to be Ortiz's best crack at an upset. He's since won three straight but looked vulnerable and aged in a 10-round win over Christian Hammer this past March.

There are industry insiders who view their forthcoming sequel as a potential spoiler for Wilder-Fury II. Fury isn't among them.

"Not at all," the 31-year old Brit insists in dismissing any chance of an upset. "Luis Ortiz is 49 years old. He’s on his last legs. I think Wilder does him inside of six rounds this time."

[QUOTE=FreezeIzGawd;20004791]See how you are double talking. You feel Ruiz should just accept the terms of this contract when it really is P!SS POOR!!! Whether you like it or no he holds 3 titles and yet as the CHAMPION he makes…

[QUOTE=REDEEMER;20004692]Wilder signed a contract to fight Fury with no date and venue and didn't get one until over a month. There is no bad contract , Ruiz wants more money on an amount he already agreed to has nothing to…

[QUOTE=FreezeIzGawd;20002794]Uhhhhhh doesnt that actually MAKE MY POINT!!!! Who would sign a contract that does NOT have a date or venue?!?!? Then you end up in a situation like Ruiz where you are supposed to fight in Saudi Arabia for LESS…

[QUOTE=DaNeutral.;20002785]He said he watched the Rumble in the Jungle LIVE with his dad as a young boy. He said he is 39 years old. One them is not true and considering that makes him a liar anyway how do we…

[QUOTE=REDEEMER;20002744]The link below says otherwise if you type in ,not sure it'll work directly ,it says he accepts the offer and awaits a contract. He got one but then said it had no date or venue so was void but…