Fury is set to take on WBC heavyweight chief Deontay Wilder in Los Angeles on December 1.

The odds are well and truly stacked against the ‘Gypsy King’, who only returned from a 31-month exile from the sport in June. 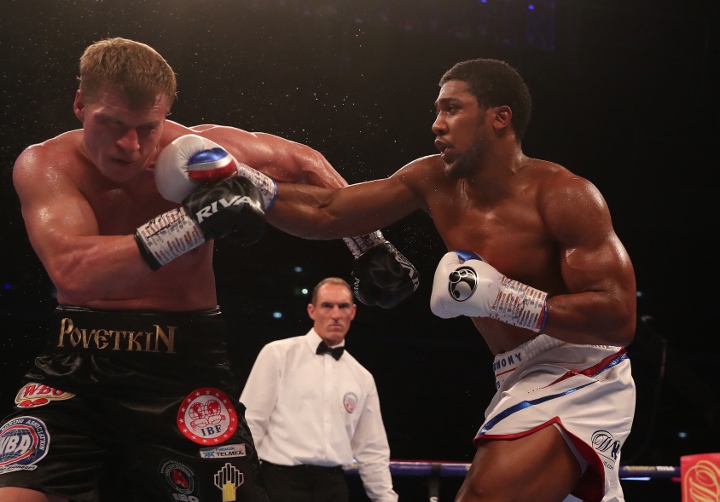 Whoever has their hand raised at the Staples Centre next month will surely become the leading contender to take on unified champion Joshua at Wembley in April.

The latter still has one of two pencilled-in dates at the national stadium to come, following a knockout win over Povetkin in the first back in September.

And Fury admits that was an impressive victory for ’AJ’.

“I thought he done really well, to be fair,” he told Fighting Spirits with Gareth A Davies.

“I thought AJ handled it terrifically, because Povetkin is nobody’s fool.

“Povetkin’s a dangerous customer. And as you’ve seen with [Johann] Duhaupas and [Carlos] Takam and everybody else who he fought, Mike Perez even, Marius Wach, all these guys, he handled them very good.

“And the only person to ever beat him was Wladimir [Klitschko]. Wladimir beating many, many, many men. So there’s no shame in losing to Wladimir Klitschko.

“With Joshua’s performance over Povetkin, he done really well. And Povetkin hit him with some good punches. I even believe he shook him up a few times.

“I thought he did fantastic to win and carry on what he’s doing for boxing.”

Fury speaking highly of Joshua may come as a surprise to many, with the two often reserving less-civilised comments for one another over the years.

However, Fury still claims he would topple the 29-year-old with ease.

“For me and him it’s totally different,” he said.

“I wanna say this but I don’t want people to think I’m being nasty towards him, because he has the awesome power and the strength and the body and the mass, and everything else that goes with that type, but he doesn’t have my boxing ability.

“And anybody who knows boxing will admit the truth: unless he catches me with a big punch, he can’t win really.

“He ain’t gonna outpoint me. I’m a very slick customer.

“Even the worst Tyson Fury there’s ever been would give him a hard night, because styles make fights. Not because I’m so great at what I do, it’s just because I’d be awkward for someone like his style.”

Povetkin is the most overrated fighter of the 2000s.

Fury speaks highly of AJ quite a bit, a lot of what Fury says when he's trolling is tongue in cheek.

Wilder is going to have to go to the body more than he usually does. I believe he loses if he tries his typical style of just looking for KO punches with a few jabs here and there. Tyson is…

[QUOTE=1hourRun;19290989]Arguably on paper Joshua might of faced better competition lately, and I do see your point : how its more difficult to be more accurate against a higher level opponent. But I would argue that everytime Deontay stepped in the…

[QUOTE=LoadedWraps;19291827]Fury will sweep Wilder in a decision if the refs somehow don't wave off the carnage. There is no "somehow" about it. Fury is leagues above both of them combined. He has no real weakness and is not only a…