Heavyweight contender Tyson Fury, and his co-promoter Bob Arum of Top Rank, have given their takes on the recent statements that were made by promoter Eddie Hearn, who recently revealed that a source had advised him that Fury was having issues in training camp.

Fury is days away from his rematch with WBC world champion Deontay Wilder, which takes place on Saturday night at the MGM Grand in Las Vegas.

Hearn had initially picked Fury to win - but now he changed his pick after he "heard a few things in the camp and stuff like that." 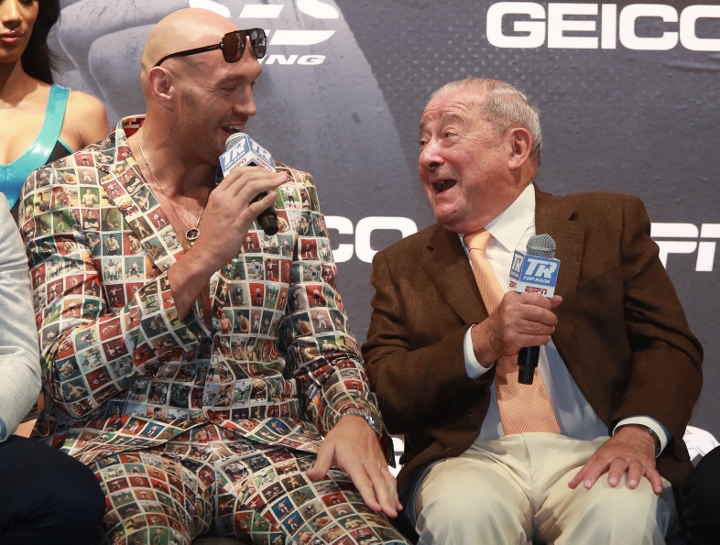 In response to those statements, Fury claims Hearn is always discussing him in order to keep the Matchroom promoted heavyweights relevant.

Arum rejected any notion that Fury was having issues during his training camp for Wilder.

"I don’t know what he’s hearing. I’m here, I know everything. My guys are in every minute that I’m not in, so what the hell is he talking about? Eddie Hearn runs from the mouth," Arum told IFL TV.

"I’m sure he heard that from 'somebody,' you hear everything in boxing. But again you have to be a little cautious about what you talk about and what to say. Who is this [source]? The guy who sweeps my gym? Eddie really has to grow up."

Fury is right, Hearn keeps talking about Wilder vs. Fury to keep AJ relevant. However, Wlad also recently said he wasn't sure if Fury is right in the head. And we know Wlad knows Sugar Hill Stewart. Who knows?

[QUOTE=Detroit29;20398399]Hearn craving attention right now. Lol. Nobody cares about him right now. And wasn't it Hearn that said this fight wasn't going to happen? And I heard Hearn said he was going to conquer America. 😂😂😂[/QUOTE] He’s definitely an arrogant…

Issues in training camp? He's talking about putting his hands in battery acid, doing cocaine, exercising his jaws by munching rug, tossing himself off to produce testosterone, getting a penicillin shot ahead of shagging prostitutes... Forget training camp, whether it's…

Guy's here who believe about all bs Fury said, 7 Wank/day, cocain, retirement... if you really believe this i can't help you.