Freddie Roach Wouldn't Be Surprised If Quigg Knocks Out Valdez

England’s Quigg, who Roach has trained for a little over a year, has knocked out two of his three opponents since he moved up from super bantamweight to featherweight following his split-decision defeat to Carl Frampton two years ago.

Valdez obviously is better and more durable than anyone Quigg has fought since facing Frampton in February 2016, yet Roach thinks Quigg can knock out the unbeaten champion from Mexico on Saturday night. 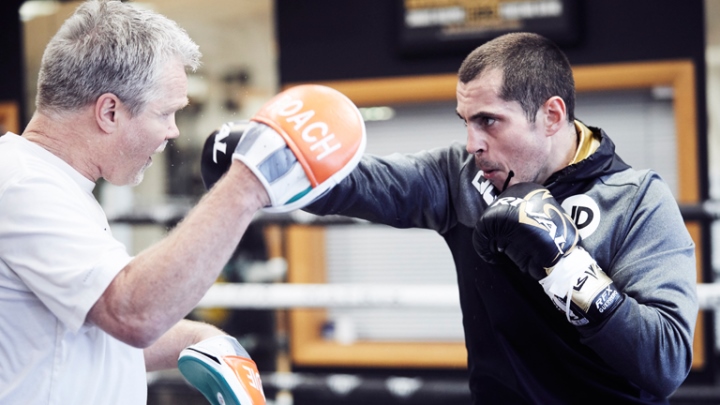 “Valdez is a very tough guy,” Roach told Sky Sports for a story posted to the network’s website Wednesday. “He comes to fight. Pretty good left hook, big overhand right, pretty methodical. We can read him and we can beat him with speed and so forth. The thing is – a lot of people don’t understand the power [Quigg] has. He has tremendous power, also, and I wouldn’t be surprised if he knocks this guy out.”

The Philippines’ Genesis Servania (30-1, 13 KOs) knocked down Valdez with an overhand right in the fourth round of Valdez’s last fight. Valdez recovered, sent Servania to the canvas with a short left hook during the fifth round and won a 12-round unanimous decision to retain his WBO featherweight title September 22 in Tucson, Arizona. Even if Quigg (34-1-2, 25 KOs) can’t drop and/or stop Valdez (23-0, 19 KOs) at some point in a 12-round, 126-pound championship match ESPN will air from StubHub Center in Carson, California, Roach is sure his well-conditioned contender has the stamina to perform well late in their fight if it goes the distance.

“He’s a great student,” Roach said. “He comes to work, he makes my job easy. He’s always in shape. We don’t have to worry about that at all. He will never get tired in a fight because he works so hard and he is a very dedicated kid. He’s a dream come true. He’s a great kid to have around.”

I fancy quigg for the upset

[QUOTE=BigZ44;18552110][B]I LOVE Valdez, but I am worried about this fight. Marriaga and Servania both gave him hell, but it doesn't seem like he's improved much or made any adjustments. He has awesome power, but throws everything at 100%, so opponents…

About to drop 10k on Valdez now. ThankS retard roach.

[QUOTE=Mexican_Puppet;18552595]Quigg is a sh.it. Valdez will win easily[/QUOTE]i agree! quigg is shyt and so are roaches predictions!

Quigg is a sh.it. Valdez will win easily