WHEN WE FIRST entered into dialogue over Carl Frampton joining forces with ourselves and BT Sport towards the end of last year, two objectives were uppermost in his thinking.

The winning of further world titles was and is an obvious ambition for someone of Carl’s calibre, but more than that he wanted a summer showdown at the national stadium in his home city.

I am proud and delighted that we are about to deliver that for Carl, who has been an absolute pleasure to work with over the last ten months or so. Windsor Park awaits on Saturday night and the place will be bouncing by the time the headliners are getting ready to step into the ring in the middle of the pitch.

Unfortunately the heatwave is taking some time off in just the wrong week, but hopefully the sun will still shine on us come fight time. I do recall though that a downpour at Upton Park did nothing to dampen spirits when we staged Haye-Chisora outside in July 2012 and I am certain the Belfast fight public won’t be put off by the odd shower. 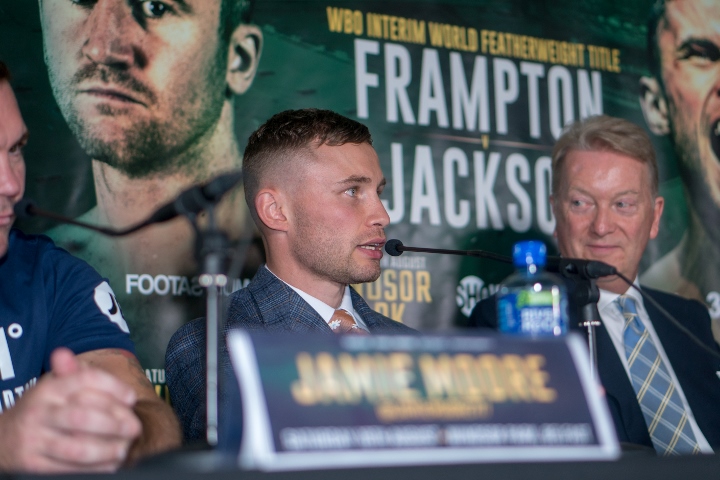 On the subject of the Belfast crowd, the reaction to this event has been truly fantastic and literally only a handful of tickets remain to be snapped up as we enter fight week. If our previous recent ventures into Belfast are anything to go by, I am sure the 25,000-strong crowd will enjoy a captivating night of boxing that will live long in the memory.

The atmosphere I know will be something very special and it is what makes Belfast shows up there with the very best in the business. In terms of noise levels they will try and outdo the fantastic Leeds crowd, it will be fascinating to compare and contrast it to the stadium show we put on at Elland Road for Josh Warrington’s world title fight in May because we could soon be looking forward to the prospect of the two sets of fans merging for a mega-fight later in the year.

Of course, I don’t want to tempt fate because Carl has got a job to do against Luke Jackson, who is a hungry, unbeaten fighter with world title ambitions of his own.

I don’t for one minute believe that Carl would consider taking any opponent lightly because he is too much of a top professional, but he will need to be on his guard because upsets do happen as we were reminded last December when James DeGale came unstuck on his homecoming against Caleb Truax.

You just cannot afford an off night in this game.

However, it is no secret that we would like to match Carl and Josh together because that really would be a fight for the fans and one you would be confident of bringing about a thriller.

Josh will be at Windsor Park sharing his insight with BT Sport viewers and I wouldn’t bet against the pair sharing a few words with each other after the final bell.

I very much hope that, by the time Carl makes his way to the ring, the Belfast fans are celebrating a new world champion.

The stage is very much set for Paddy Barnes to make history by becoming the WBC world flyweight champion in just his sixth fight as a professional. He certainly won’t have it easy against a confident champion in Cristofer Rosales, who stopped the excellent unbeaten Daigo Higa last time out on away turf in Yokohama.

While it was a superb scalp for Rosales to claim, what we don’t know is to what extent Higa was below par due to issues with making weight. What we do know is that Paddy will need to be at his very best to topple the Nicaraguan, but with 25,000 fans behind him you wouldn’t back against the Belfast boy.

If Carl and Josh do end up exchanging a few pleasantries before hopefully signing up to fight, any verbals will doubtless be slightly more measured than whatever Tyson Fury and another ringside analyst will have traded earlier in the evening.

Yes, Deontay Wilder, the WBC world heavyweight champion, is in town and I am sure he will make himself heard on a range of subjects. His reason for travel from Alabama is essentially a scouting mission ahead of a near-certain blockbuster coming together with Tyson later in the year.

Like Carl, Tyson cannot be distracted by what lies ahead and needs to demonstrate that he is now back in the game against Francesco Pianeta. The landscape of heavyweight boxing can change in a split second so Tyson will need to show that he has retained the knack of not getting hit while hopefully clocking up some rounds against the Italian-born southpaw.

If all goes to plan, then we can start thinking about Wilder and I am of no doubt there will be a media scrummage around the Bronze Bomber.

It will only add to the occasion, but the night is really about Carl and Paddy continuing to make Belfast the place to be when it comes to big fight nights.

Frank warren is a loser who chased out I get why Hearn doesn’t want that but it looks so much worse in the long run when wilder knocks out furry and then Johnson quicker.