OUR FISTIC FEAST at the o2 Arena on July 13 is about so much more than just the heavyweight offering we are serving up as the main course. We have also got a good few tasty little side dishes that will spice up the night.

Of course, the clashes of the giants featuring Daniel Dubois vs Nathan Gorman with the British heavyweight title at stake, along with Joe Joyce entering into his toughest fight to date against Bryant Jennings will rightly dominate the build-up and capture the imagination ahead of a punch being thrown, but boxing fans will be aware that we have three genuine contenders and big talents taking the next step in their careers before the main events.

Liam Williams, Archie Sharp and Sunny Edwards are real quality operators, as well as being three of the most exciting fighters in the British business. I fully anticipate all of them pushing on to world title contention within the next 12 months or so. That is the plan. 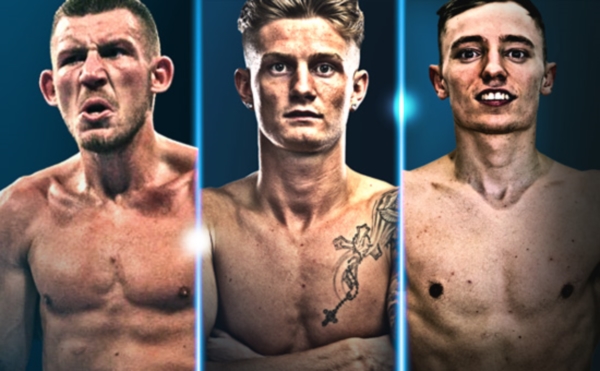 Liam is further along the track than the other two, having already blazed a trail through the domestic light middleweight scene and knocking over most of what was put in front of him.

His route to world honours at light middle hit a little roadblock when he ultimately came off second best in a thrilling double-header against Liam Smith, but he certainly appears to be stronger for the experience.

The fact remains that Liam Williams could have become world champion in his first fight against Liam Smith – who I also promoted at the time and consider a good friend – because had his corner allowed due process to take its course following the horrific cut eyelid he sustained, the fight would have been stopped by the doctor and it would have gone to the scorecards, where he was ahead.

Pulling him out of the fight took the decision out of the hands of the officials and handed victory to Liam Smith who, if you remember, couldn’t win the Interim world title that was on the line after missing weight.

Had he not come in over, Liam Smith would have been elevated to world champion because Canelo subsequently vacated.

So it was a big missed opportunity for the Welshman but we now have, in my opinion, a more mature and experienced individual now targeting a world title at middleweight.

It turned out to be a shrewd move by Liam in stepping up and accepting the British title shot against Mark Heffron in December. He knew he was in with a dangerous banger, but brought into the fight all the improvements he made since switching camps to Sheffield under Dominic Ingle.

Moving away from his home comforts appears to have paid significant dividends and I want to see Liam push for the very top again. It probably won’t be long before the current world champions are trying their luck at higher weights, so the field could be very much open for Liam to really make his mark in the sport.

First, however, he has got a job to do against a tough former European champion who has never been stopped in Karim Achour. The fight is for the vacant WBC Silver title, so if he picks up the belt he will be right in the mix near the top of the world rankings.

Archie Sharp went quietly about his business while he served his time learning the ropes during his early fights. During this time people would probably have leaned towards Zelfa Barrett or Lyon Woodstock when assessing which super featherweights were likely to progress.

Young Archie changed a lot of minds when he took on an away-day challenge and went up to Leicester to defeat the local favourite in Woodstock last year. In doing so he has put himself right in the reckoning to push through for world titles.

My admiration for a fighter only increases when they are willing to take a chance and go to their opponents back yard and put on a show. Archie did that with a pretty much punch-perfect display against Lyon and demonstrated to us that he is more than at the level to be accelerated and showcased in big TV fights.

Unfortunately injury stalled him a bit earlier this year but he is back at it now and ready to defend his WBO European title against Jordan McCorry. Archie will need all his stealth and nifty footwork against the Scot, who gave the British champion Sam Bowen a rough ride during a recent title defence.

Archie is leaving nothing to chance though and covers all the bases in his preparation, especially in making sure his mind is firmly fixed on the job in hand. It is fairly well documented that he employs mind coaching as part of his training and he appears to take great strength from the programmes designed for him.

They say these days that being successful in sport is something like 95 per cent in the mind, so Archie could well be onto something that gives him an edge when marginal gains are so valuable. After all, anyone can train and get fit, but it is talent and strength of mind that separates the elite operators from the rest.

Archie is talking about fighting for world titles already, which shows the belief he has in himself and I too think he has got what it takes to succeed.

Another one not short on confidence or self-belief is our little Showtime Sunny Edwards. You kind of get a complete package with Sunny in that he is naturally gifted and entertaining to watch, he has got a swagger about him and he is not short of a few words to say when a microphone is put in front of him.

His British rivals are showing no inclination towards wanting to share a ring with him, which is a shame, but we will not let this hold him back and we will continue to set about improving his world ranking with good level international fights.

At the o2 Arena Sunny will bid to add the IBF International title to the WBO belt he already holds when he takes on the Mexican Hiram Gallardo, who will present another useful test for him.

I am a big fan of Sunny and it will be a genuine pleasure for me to steer him to a world title win and I see this happening sooner rather than later.

So it is onwards and very much upwards for our three so-called support acts on July 13 and it won’t be long before they are calling the shots and headlining the big shows.

In the meantime, we will all enjoy the ride, with the next stop being the o2 Arena where we have a Heavy Duty night of boxing to look forward to.