Frank Warren Reflects on Bringing Boxing Back in The UK

BOXING’S BRAVE NEW – and hopefully short-lived – world was ushered in, in an ultra-efficient fashion on Friday night and I am proud of my team and all our fighters who helped make it such a success.

It was never going to be easy with all the restrictions and protocols that had to be put in place to bring the sport back for the fighters and fight public but, I have to say, it was well worth all the painstaking attention to detail we had to apply right from the beginning of the process.

It was a slick operation and I think this was conveyed by the excellent programme package delivered to subscribers by the superb BT Sport production team.

Friday was the first of many and we were first out of the blocks by a few weeks, so there will be a full assessment of what worked, what didn’t and what could be done better. We needed to get the first one done and we can make a few tweaks as we go along. 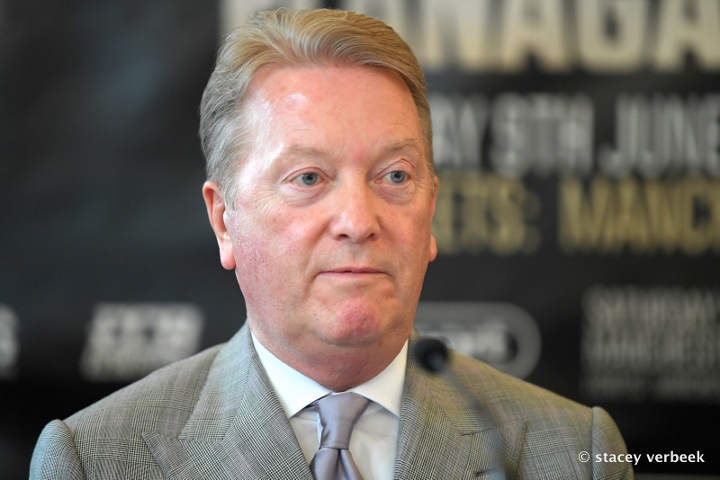 The fighters more than played their part and dealt admirably with the unusual circumstances, such as being confined to barracks at the hotel and having no physical contact with the outside world.

It cannot be easy for young athletes with energy to burn to be denied simple freedoms such as going outside for a little walk. Hopefully, with time, restrictions will be eased and fight week will return to more like normality.

For now though, this is the deal and the price of bringing boxing back to the forefront where it belongs.

I was particularly impressed with a typically bullish – and brief – display from Mark Chamberlain. The boy can punch and we are going to have to significantly step him up in levels to find opponents who can live with his natural power.

He shouldn’t get carried away though because punchers don’t always have it all their own way and there has got to be a plan B and C.

I was happy to be able to give Dorin Krasmaru his moment under the lights.  Opportunities have been hard to come by for him since he turned over at the same time as Daniel Dubois, but he continues to give it his all in the gym and provides such valuable work for our young heavyweight superstar.

Our other young heavy, David Adeleye, doubled his win-count with a second round stoppage and showed everybody that an exciting new force is emerging.

He is certainly an exciting addition to the heavyweight scene and we will keep him busy, but he has got a lot to learn and work on, so we won’t be putting undue expectations on him at this stage.

Hamzah Sheeraz again showed that he is a cut above and is such a mature operator for his young age. He is a class act and he is now showing us what he can do against more experienced opponents with good records.

I don’t think there is any limit to what he can achieve based on what he is delivering so far and his popularity will go from strength to strength because the young fella has no shortage of charm.

Much the same can be said of Brad Foster, who continues to impress me and it really is remarkable what he has achieved from a standing start in such a short space of time.

To be British champion outright in 15 fights at the age of just 22 with no amateur background in the sport speaks volumes for the talent and application of the young man. He is clearly just a natural in combat sports – having grown up kickboxing – and I am excited to see how far he can go.

His opponent, James Beech jr, did himself proud and I knew a British title fight between two young fighters was the way to go when it came to bringing boxing back.

We have now got the return of the Juggernaut, big Joe Joyce, to look forward to on July 25.

If Frank wants to move Mark Chamberlain up then why not match him with Southern area champion Alfie Price next?