Frank Warren: Khan is One Ballsy Character To Face Crawford

IN THE SPACE of a week, two British fighters will have come up against the very best in the pound-for-pound business over in the States.

Last weekend played out in a sadly predictable fashion when the very likeable Anthony Crolla took a mauling at the hands of the remarkable Vasiliy Lomachenko.

It didn’t make for pleasant viewing and anyone who has even the remotest knowledge of boxing knew how that one would go. Nobody is being an after-timer and I just hope Anthony got extremely well paid for that fight. 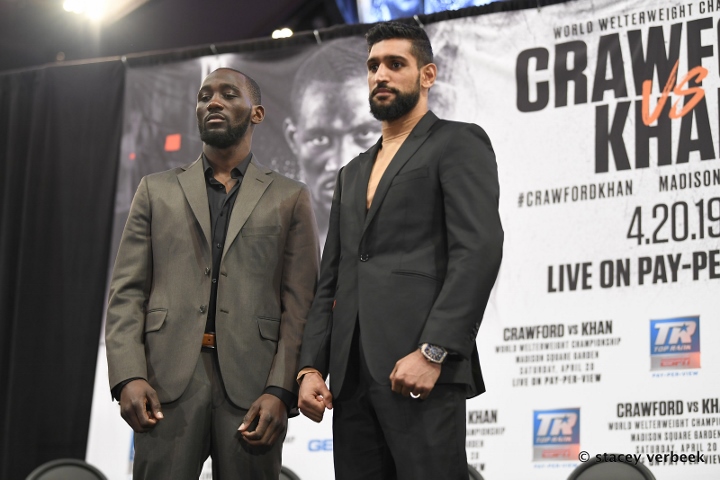 For me, whatever he got paid, can’t be enough because a beating such as that can come back to haunt you. It was not a winnable fight and it was one that he lost as soon as he signed the contract.

Amir Khan, on the other hand, who fights Terence Crawford for his WBO world welterweight title this weekend, did have options and chose the toughest one of all.

He could have fought Kell Brook in a fight of rapidly diminishing interest and who knows who would have won out those two because, let’s be honest, both of them have seen better days.

Amir plumped for the big fish in Crawford who, along with Lomachenko, make up the two best fighters in the world in my book.

So once again Amir is jumping right in at the deep end. Can he do it? What I do know is that he is one ballsy character for stepping up and attempting to recapture former glories.

That, unfortunately, will be his undoing because I can’t see him winning the fight. I could say ‘you never know’, but I am sure I do and I think we all know what the outcome will be.

I do think Amir’s natural ability will see it to that he makes a better fist of it than Crolla was able to do against Lomachenko and it will be worth tuning into BT Box Office to see if the great Crawford is forced to go through the gears.

I’ve heard the argument that Crawford is relatively untested at welterweight and Amir will be the best he has come up against. Fair comment but, unlike the vast majority of British fighters, the Americans successfully go through the divisions and win world titles.

For whatever reason, the American-based fighters going back to say Sugar Ray Leonard have always sought to become multiple-weight champions, unlike the Brits who tend to stick at their weight, or just move up one.

Some of these American fighters – and don’t ask me how – seem to whizz through the divisions and Crawford is one of the best to do so. The other champions aren’t exactly queuing up to face him at welterweight, so credit to Amir for stepping up to the plate.

[QUOTE=Robertthebruce;19671584]Hope their aren't any idiots in the UK who are paying for this mismatch cos if you are then your a fool putting cash into the grinning Khan's back pocket. Watch the KO for free on youtube and don't get…

[QUOTE=Reverb;19671812]I'm not convinced by this thing about winning being the basis for people enjoying watching certain boxers. Some are simply in entertaining fights. Anything to do with interviews and press releases and showbiz chat is just trash. it's all irrelevant…