Frank Warren: Joe Joyce is Not Far Away From World Title Shot

JOE JOYCE is in the mood to crash the heavyweight world title party.

The Rio Olympic silver medallist penned a promotional agreement with us this week and we are ready to guide him to the top guys in the division.

The signings means we have three of the best up-and-coming heavyweights in our ranks with Daniel Dubois and Nathan Gorman in our stable too. 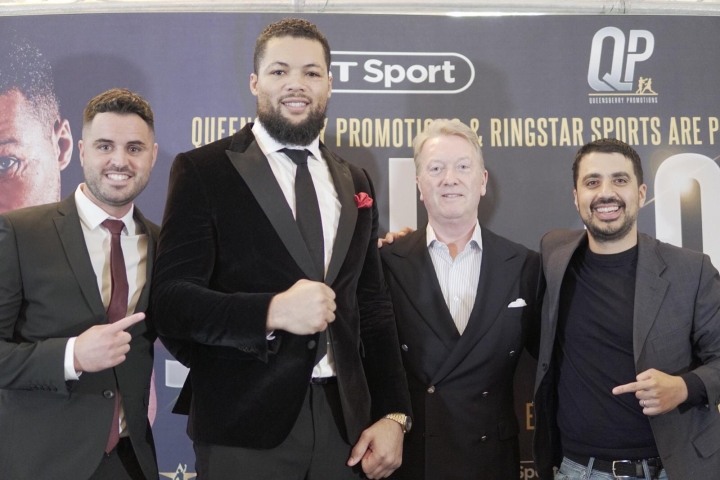 Joyce is 33 but is still fresh in the pros with eight wins from eight along with the younger duo of Dubois and Gorman.

Those three could all face each other and none of them will fear losing and any of the losers shouldn’t worry about adding a defeat to their record.

I was bold enough to put George Groves and James DeGale in together earlier in their careers back in 2011.

DeGale lost the decision but he was still first to win a world title which shows you protecting undefeated records is nonsense.

Joyce is already well on the world title path as he is mandatory for the European title and also in the No. 1 position for Manuel Charr’s secondary WBA title.

So it won’t be too long until he gets his crack at Tyson Fury, Anthony Joshua or Deontay Wilder.

I fully expect Dubois to be mixing it with the best in the division soon too.

He has a tough challenge tonight at Wembley Arena against Richard Lartey, who had some issues getting into the UK this week.

It is another big night of learning for Dubois. He didn’t turn pro with an Olympic medal in his back pocket and only had seven senior bouts as an amateur.

Dubois is also building his profile and the more fights he has on BT Sport the bigger his name becomes.

It would be a great achievement to take this guy from novice level to a world title.

He'll probably fight Manuel Charr because that's the only titleholder that he has any real chance of winning against. He sure as hell isn't beating Joshua, Wilder or Fury.

[QUOTE=P4Pdunny;19701531]Titleholders beat Joyce[/QUOTE] Joyce would pummel Wilder inside 6 rounds if Wilder doesn't get him out early. After the Breazeales fight I highly doubt most would give Wilder the edge because Joyce is a stronger version of Breazeale and Wilder…

He's really not, look what Dillian Whyte has done without getting a shot