THERE IS only one show worth watching tonight - and that’s in Belfast.

Forget Amir Khan against Phil Lo Greco. Boxing and sports fans in general should be tuning in to Carl Frampton’s potential classic with Nonito Donaire.

A former two-weight world champion going to toe-to-toe with a four-weight ruler in a sold out SSE Arena in Frampton’s own backyard - what’s not to like? 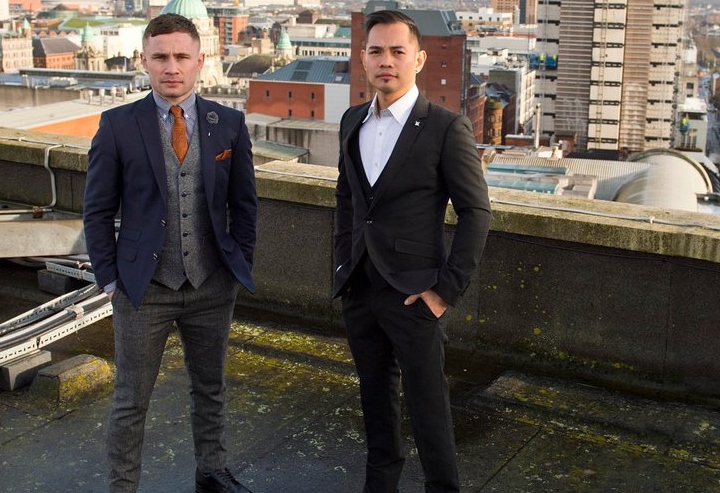 Donaire is arguably the greatest ever foreign fighter to visit the city and his career is on the line.

Frampton is one of the finest boxers to hail from the Emerald Isle with defeat not an option for him so all the ingredients are there for a thrilling main event.

And the undercard isn’t bad either.

The WBO bantamweight title is on the line when Zolani Tete takes on former world champion Omar Narvaez.

And the all-Irish dust up between middleweights Conrad Cummings and Luke Keeler has the potential to steal the show.

Over in Liverpool, Khan is coming back from two years out of the ring. He is a big name but he is up against an opponent he should easily beat if he has anything left in the tank.

That is fair enough after a long absence – as it will be the same for Tyson Fury in June - but there is little to get excited about on that card on Merseyside.

They are selling this as Khan’s big return from the ‘I’m a Celebrity’ jungle.

His personal problems and social media spat with Anthony Joshua have raised his profile further.

But this is sport not a soap opera and the real action is in Northern Ireland tonight.

It’s just a shame that some have chosen to ignore it is happening.

Frampton is one of only a few from these shores to win world titles in two weights and regularly sells out arenas making him, outside of Joshua, arguably the biggest name in the sport from the UK.

But when he has a make-or-break fight against one of the top fighters from this era, it can be overlooked.

Is that really fair?

Frampton v Donaire is live on BT Sport and BoxNation tonight from 7.30pm.

frampton and donaire should be good

[QUOTE=boliodogs;18690991]Donaire and Frampton are much better fighters. Donaire actually has a chance to win. Khan cherry picked such a mediocre fighter that he almost can't lose. 20 to 1 betting favorite Khan will win and declare himself the world's best…

Donaire and Frampton are much better fighters. Donaire actually has a chance to win. Khan cherry picked such a mediocre fighter that he almost can't lose. 20 to 1 betting favorite Khan will win and declare himself the world's best…

You'd think this biz of 2 fights at once would be easy enough to stop doing, if promoters would work together instead of fighting for a piece of the boxing audience... but it has happened that way for decades. I…

[QUOTE=Pinoy4ever;18690674]I believe that Frampton vs Donaire will be a more interesting fight but not going to sleep on Khan[/QUOTE] I see what you did there. Khan... Going to sleep.... LOL