WITH THE ONGOING circumstances across the globe still dictating that boxing fans remain absent from ringside, like many other sectors we have been forced to adapt and specialise in home delivery.

Here at Queensberry we were eager to provide sports fans with their fistic fix and we got punches trading again at the earliest opportunity on July 10. From that date in a four-month period until October 10 we have or will have delivered eight shows for the fans to enjoy at home.

At the beginning it was about making it happen, finding a way that would meet and satisfy the multitude of safety regulations. Now we are stepping it up.

The shows we have announced this week, headlined by Anthony Yarde, Liam Williams and Josh Taylor respectively, have been a real statement of intent from both us and BT.

Boxing is back, and it’s back in a big, big way. 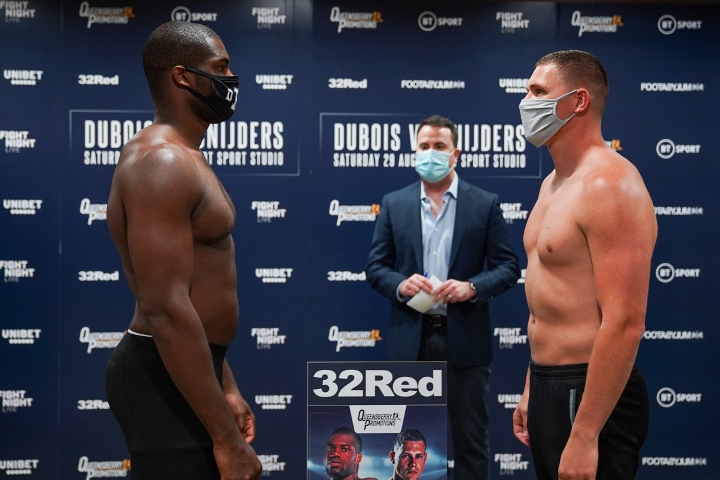 These upcoming events on BT have everything. This Saturday we have the man I believe is the heir to the Heavyweight throne, Daniel Dubois, continuing his journey to the summit of world boxing but, after that, we have blockbuster shows on September 12th, September 26th and October 10th that truly defy the expectations I had when I first considered running events behind-closed-doors.

Then, just two short weeks later, Josh Taylor will be the first male World Champion to defend his belts as he faces Thai Apinun Khongsong on September 26th. That unified Super-Lightweight clash will be supported by the Queensberry debut of Charlie Edwards against Kyle Williams. Not to mention that the show will also see Willy Hutchinson, George Davey and Eithan James return to action, the fact we are putting on World Title fights and former world champions makes me genuinely proud. I am delighted to be spearheading boxing’s revival in this country.

On October 10th, ‘The Machine’ Liam Williams will look to beat up his mandatory challenger for the British Title, Andrew Robinson. Liam Williams is on an unstoppable rise at Middleweight and purse bids for his WBO world title tilt against Demetrius Andrade could happen any day. Liam being Liam, though, he wants to fight and is delighted at the chance to take on a mandatory challenge.

The quality of these cards is unreal. I truly believe they’d stack up well against any pre-covid shows, but in this Lockdown era I think the level of these shows is unparalleled.

From show one, when it was initially stipulated that there would be no World title action and just a selection of four to ten rounders, we were able to put on British title action involving young Brad Foster – now a British champion outright at the age of just 22 – along with a WBO European title fight won by Hamzah Sheeraz, who I believe is going to be a genuine star of the sport.

The likes of Olympic stars Joe Joyce and Michael Conlan were subsequently featured, along with Carl Frampton, Archie Sharp, Lyndon Arthur and a host of the best young talent currently making their way in the game.

But the run of shows we are about to embark on, starting on Saturday, is taking it up a good few notches and the response from the fans at home has been more than encouraging.

Before then though, attention must turn to BT Sport Studio on Saturday night for the return of the “most prized Heavyweight prospect” in world boxing, as American journalist Lance Pugmire referred to Daniel Dubois earlier this week.

Starting from 7pm on BT Sport – following on from the Community Shield season curtain-raiser between the champions Liverpool and FA Cup winners Arsenal – we build up towards that main event showcasing our man ‘Dynamite’ Dubois against Dutch opposition in Ricardo Snijders.

The public have already caught on to what Daniel is all about and, if you haven’t, where have you been? I don’t think we have seen anything comparable to the bludgeoning power and force that Daniel brings since the early days of Mike Tyson.

The 22-year-old – at least eight years younger than those in the elite party he is looking to gatecrash – is booked in for a blockbuster against Joe Joyce on October 24 but, like all the other fighters, he needs a piece of the action before then so he will fight the 18-1 Dutchman Snijders on Saturday.
Somebody else with world titles on his mind is Showtime Sunny Edwards, our super-skilled and extremely charismatic super flyweight, who is taking on a tough test against the former Olympian Thomas Essomba.

Essomba is a dangerous customer and even more so now because he has had a long time to prepare. Also, opponents are thriving more in the current climate because there is no ‘home fighter’ as such, with no fans in the room.

Sunny is world class though and I expect him to come through and benefit from the experience. I want him in world title contention sooner rather than later.

We can expect another proper fight between the super lightweight pair of Sam Maxwell and the former European champion Joe Hughes. If you are not on your game then you will lose to Joe Hughes, simple as that, so Sam needs to impress and demonstrate he is ready for the marquee fights.
So, as you can see, there is plenty to look forward to coming up on BT Sport with shows that have a bit of everything. The young heir to the heavyweight throne, unified world title action, genuine world title contenders, domestic wars galore, along with the best young fighters in the sport.