DEONTAY WILDER DID what he always does and pulled out a peach of a shot to get himself out of bother against Luis Ortiz and retain his WBC world heavyweight title for the 10th time. (photo by Ryan Hafey)

Most importantly he came through unscathed and now we can get on with the process of making the rematch against Tyson Fury for February official.

There can be no doubting that Deontay is a phenomenal puncher and staying out of harm’s way against him for 12 rounds is a tall order. I think what you have got to do is dominate him and take the fight out of him.

If anyone can do it, Tyson can and I am sure he will in what will be the first mega-match of the new decade and the biggest heavyweight fight there to be made. 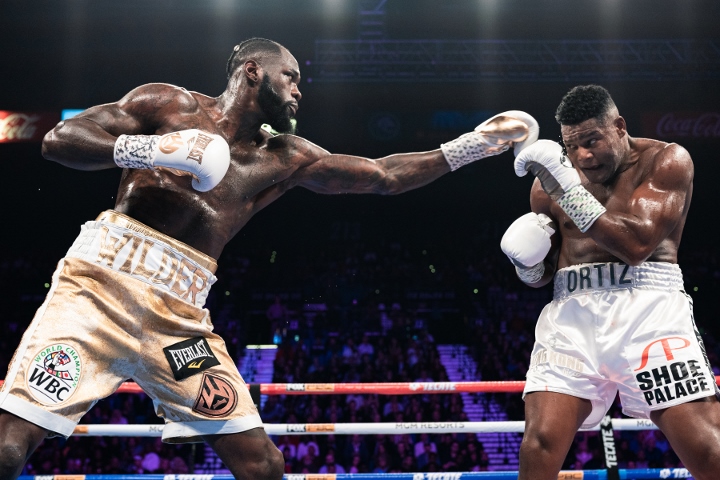 A BIG WELL done to Jack Catterall who successfully navigated his way through his keep busy fight in Dubai at the weekend against a decent level of opponent in Timo Schwarzkopf. Jack, of course, is having to play the waiting game after hitting top spot in the WBO super lightweight rankings and becoming mandatory for a world title shot.

Unfortunately the former champion Maurice Hooker opted for a voluntary defence and then took on a unification match against the WBC champ Jose Ramirez – which he lost – and now the unified champion has two mandatories to oblige.

He is set to face Viktor Postol on February 1 and when that is done Jack’s time will come.

I WOULD LIKE to send my best wishes to Carl Frampton ahead of his return to the ring against Tyler McCreary in Las Vegas this weekend. Victory over the unbeaten American will see Carl propelled towards another world title fight at a third weight against the WBO world super featherweight champion Jamel Herring. Good luck Carl.

Coverage of Frampton v McCleary starts from 2.45am on Sunday morning, live on BT Sport 1.

Wilder is not a quick study, but if you give him two fights, he will find a way.

Let's just hope Fury doesn't randomly decide to pig out on some boar testicles before Feb.

Wilder can not hit a big fart. Fart Fury can win this one!