Frank Warren, promoter for top heavyweight Tyson Fury, has praised his fighter for the highly publicized angles in the WWE - but at the same time the veteran promoter is very concerned that his fighter could injure himself.

Since last Friday, Fury has taken part in a series of angles with WWE superstar Braun Strowman.

Earlier this week, the two athletes had a scripted brawl during the WWE's flagship show, Monday Night Raw.

The WWE will hold a press conference this Friday at the T-Mobile Arena in Las Vegas - where the company is expected to announce a Fury vs. Strowman wrestling match for a planned card in Saudi Arabia, on October 31. Both Fury and Strowman will be present at the press conference. 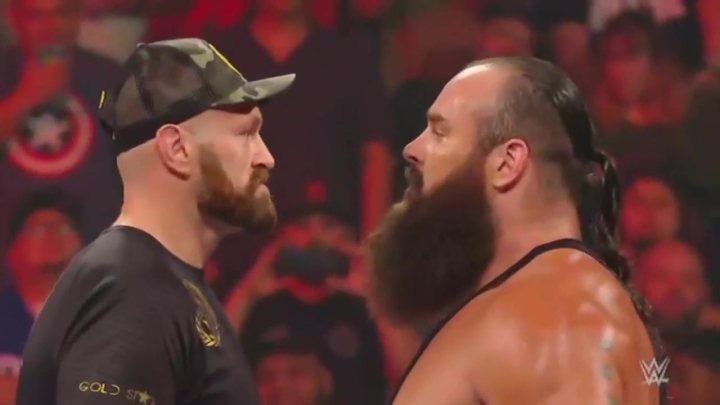 Last month, Fury suffered two deep cuts above his right eye in a twelve round decision win over Otto Wallin.

Warren is worried that Fury could potentially re-open those wounds, during his wrestling match.

Further injury to the area could risk a planned rematch with WBC heavyweight champion Deontay Wilder - which is being targeted for a date in February.

"Tyson Fury loves it," Warren told Metro.co.uk. "That brawl clip doing the rounds on social media has something like 4 million views.

"His profile gets bigger every time and he’s doing us promoters a real favor by going on WWE. But truthfully, I don’t like the risk of his cut opening up. Tyson’s a law unto himself. It’s risky though, no doubt about that. In an ideal world I’d prefer he didn’t do it, but it’s all about the bigger picture for him. He’s a natural wrestling star."

And as far as Fury taking part in an actual wrestling match.

"I’m still awaiting the call from Tyson to tell me he’s finished with this WWE stuff," Warren said.

[QUOTE=TinAgeOfBoxing;20113182]Fury is training for another rigged Wilder fight. The pre fight antics for the first Wilder/Fury fight were exactly WWE along with Wilder pulling punches during the fight and a rigged decision.[/QUOTE] I may have lost my friggin marbles but…

[QUOTE=Boxingfanatic75;20113279]All of the above you named were already global phenoms long before their appearances at fake fighting events and boxing was at its peak in each of those times. To do so now in order to gain a fan base…

[QUOTE=Scopedog;20113194]I don't exactly approve, but these fights are all scripted and rehearsed. I doubt there'll be any truly serious risk of injury.[/QUOTE] Im not so sure. "Raslin" is fake as hell obv, but injury's happen all the time even with…