It’s not hard to believe that Orlando Salido and Francisco Vargas might pair for a Fight of the Year level contest. For Salido, it was his fourth such battle in a row. Dating to his surreal war with Terdsak Kokietgym, the veteran has become boxing’s most reliable money’s worth ticket.

Vargas is quickly catching up. For the second fight in a row, he too engaged in a classic. This one didn’t have had the closing drama of Salido-Kokietgym or Vargas-Takashi Miura. Instead, it featured a steady escalation that asked hard questions of both men, forced continued adjustments, and saw the momentum swing repeatedly.

In the early 1980s, 130 lbs. featured a series of wars highlighted by the presence of the unforgettable Bobby Chacon. Salido and Vargas are putting together a dossier in the division worthy of playing heir to that great tradition.

Pre-Fight: Intangibles – Vargas B+; Salido A/Post: A; A

Some thought Salido won, others (including this scribe at 115-113) Vargas. They were all right. It was a rare occasion where a draw seemed fair.

But for a couple points, he could well be a double belted titlist at 130 lbs. He had legitimate beef with the outcome of his rematch with Rocky Martinez last year. There was less beef here. Both men had a case for winning. Vargas got off to a pretty good start in the first two rounds. Salido lit a fire from there, slipping in close, working the body, opening matching cuts over both Vargas’ eyes. 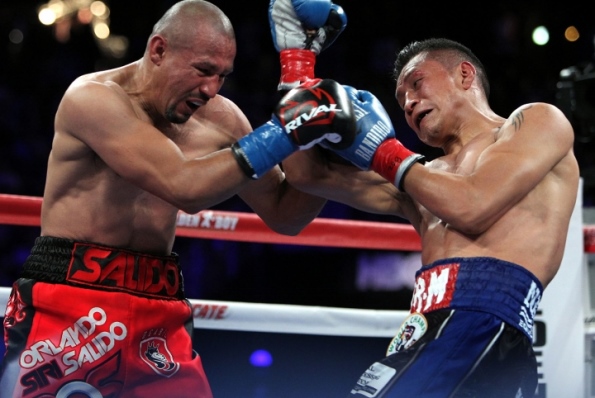 It was brutal but also skilled. The ability both showed to adjust, to find new openings or seize advantages when the fight was slipping away, spoke to their professionalism.

There were a couple of round of the year candidates. Rounds six and ten were both breathtaking, forcing the best from the combatants and the fans from their seats. If it seems here there is more focus on superlatives, so be it.

It was that sort of night.

The way the momentum shifted is one of the most special elements of the night. They seemed to trade turns in the lead every couple rounds. Salido took some mammoth single shots and kept his feet for the full twelve, remarkable considering how often he’s been down in the last few years (thirteen times in nine fights).

After the tenth, Salido’s expression in the corner was one of fatigue. He looked spent. He wasn’t. He dug deep in the eleventh to turn the tide one more time and made a case in the twelfth. So too did Vargas in the final round, pasting Salido with one of the best right hands of the fight and visibly hurting him.

There was no winner but everyone won; the fighters, the fans, and maybe even the box office. Featherweight titlist Vasyl Lomachenko was in the audience, looking at revenge possibilities against Salido. There’s nothing wrong with wanting to avenge one’s only loss. Lomachenko should get that chance.

But we’ve seen Salido-Lomachenko and now we’ve seen Vargas-Salido. There was no comparison between the two. If a rematch is to be next, there is only one obvious choice.

Sign this corner up for Vargas-Salido II as soon as both men have some rest.