Frampton: Santa Cruz Has To Take Sole Responsibility For Third Fight Not Happening

The former WBA featherweight champion never sensed the feeling was mutual. That’s why Frampton blames Santa Cruz for the fact that their third fight hasn’t happened.

Belfast’s Frampton is the only opponent who has beaten Santa Cruz, who lost his WBA featherweight title to Frampton in July 2016 at Barclays Center in Brooklyn. Santa Cruz avenged that majority-decision defeat when he defeated Frampton by majority decision in their immediate rematch in January 2017 at MGM Grand Garden Arena in Las Vegas.

Frampton was willing to come to the United States a third time for another shot at Santa Cruz, but he has given up hope of that fight taking place.

“To be honest, I don’t see the fight ever happening,” Frampton said during SiriusXM’s “Ak and Barak Show” on Wednesday. “I think it’s been and done. It should’ve happened. There should’ve been a third fight. But, you know, you can’t really point the finger at me as to why it never happened. I think Leo has to take sole responsibility. I was happy to travel to L.A. [to do it]. I wanted the fight. Everyone knows I wanted the fight. I still want it. I just don’t see it happening.” 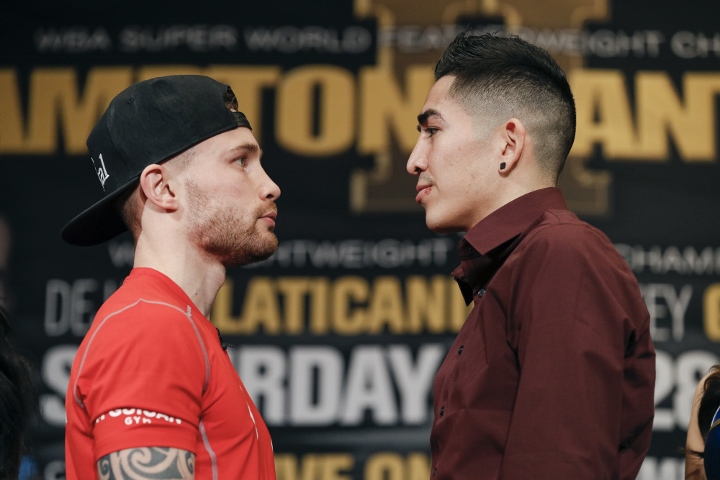 The 33-year-old Frampton is supposed to challenge WBO 130-pound champion Jamel Herring (21-2, 10 KOs) in his next fight. The 31-year-old Santa Cruz, of Rosemead, California, is expected to battle Baltimore’s Gervonta Davis (23-0, 22 KOs) in his next bout.

Frampton doesn’t believe Santa Cruz actually will go through with what would be a difficult fight against the heavy-handed Davis.

“Even the Gervonta Davis fight, even though Mayweather Promotions have said that that is Leo Santa Cruz’s next fight, I still don’t believe that [will] happen,” Frampton said. “That’s a tough fight. It’s a very, very hard fight, and I think at this point Leo, if you dissect Leo’s career, he’s had a few tough fights. But most of his fights have been kind of fights where he’s, you know, a big favorite to win. I don’t think he likes to take on challenges, where he’s not gonna win the fights. And I think that’s why the third fight with me never happened, because you know, I don’t think he expected me to beat him the first time. Then, when I did, he beat me. I don’t think he wanted to lose again, and that’s why it never happened.”

Definitely sole on him. He promised something then came out like “My dad said I shouldn’t go to Belfast” what’s with some Americans and not wanting to travel? Even when they stand to get paid more.

[QUOTE=RJJ-94-02=GOAT;20576804]Didn’t he say he’d travel to Belfast? Leo hasn’t took one risk since the Frampton rematch. The loss to Frampton scared him or his handlers IMO. Following the Frampton fight he’s fought Avalos, a rematch with Mares (when the first…

I don't get why he sounds surprised that Santa Cruz has gone back on his word.. Hes not known as "Ducker" for nothing. Whether his camp/team has anything to do with it I don't know but you'd think he'd be…

I agree, since Santa Cruz signed with PBC his competition has been atrocious. IDK what Santa Cruz wants to accomplish fighting the level of competition he has recently fought? That being said Frompton himself has not fought anyone of relevance…

[QUOTE=Shadoww702;20576764]Wasn't even close. No need for a 3rd fight and Frampton has looked way worse[/QUOTE] what a shocker, you're condoning a Mexican ducking. Clown.