Carl Frampton remembers how proud Alejandro Gonzalez Jr. was of what he had done.

The fatigued fighters were sitting together in an El Paso, Texas, hotel a few hours after they had gone 12 hard rounds against each other. Northern Ireland’s Frampton and Mexico’s Gonzalez were from different worlds, but bound by mutual respect boxers usually develop only for fellow fighters.

They talked about boxing, their dreams and their families. Gonzalez, just 22 at the time, showed Frampton photos of his wife and son on his phone.

Frampton, then the IBF super bantamweight champion, had just beaten Gonzalez by unanimous decision in a nationally televised, 12-round fight, Frampton’s debut in the United States.

Gonzalez gave Frampton an early scare in a fight Frampton was favored to win handily. He floored Frampton twice during the first round, before Frampton gained control of a fight CBS televised from El Paso’s Don Haskins Convention Center in July 2015.

“It was a matinee show, so we had a bit of time [after the fight],” Frampton told BoxingScene.com. “I was kind of on the beer, kind of down in the dumps because I had a bad night, I thought. And the kid was happy because he wasn’t expected to do anything in that fight, and he dropped me twice. His stock had risen and he got well-paid for it, so I just remember him being grateful almost for the opportunity. I remember him speaking about his kid and how [that fight] was gonna change his life back home.” 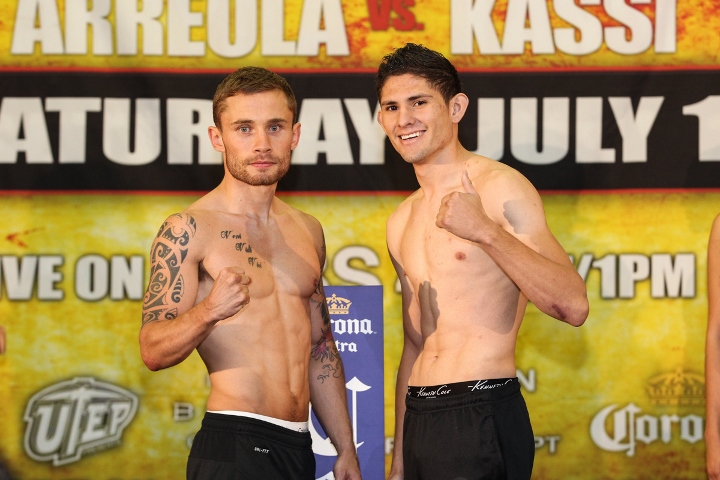 Gonzalez, 23, was murdered December 9 along with two other men, including his grandfather, by unknown assailants in Gonzalez’s native Guadalajara, Mexico. According to Mexican media outlets, they were executed as part of a hit by a drug cartel.

Their bodies were found in a pickup truck. The gunmen responsible for murdering them reportedly left a threatening note at the scene of the crime.

“It was shocking to hear,” Frampton said. “It was a strange feeling when I actually heard the news because he was such a nice kid. And that’s how I remember him. I had a hard, hard fight with him, and I wasn’t expecting it to be a hard fight.

“I remember me and my wife [Christine], we sat down with him after the fight. I had a beer. I had a few beers. He had a McDonald’s [meal] and a milkshake. He just seemed like an innocent kid, almost. He was a real nice guy. He had a young family. It was absolutely shocking. When you hear things like that, it’s upsetting. It was very, very upsetting.”

Frampton will honor Gonzalez’s memory with a patch on his trunks when he fights Leo Santa Cruz in their featherweight championship rematch Saturday night in Las Vegas. The patch will read, “Rest in peace, Cobrita,” an acknowledgement of Gonzalez’s nickname. Gonzalez, who turned pro when he was just 17 years old, used the same nickname as his father, former WBC featherweight champion Alejandro Gonzalez.

“It’s just to show my sign of respect for the guy,” Frampton said. “When you share a ring with someone, you gain that respect that you don’t have for many other people, especially when you go 12 hard rounds. He’s someone that I respected and I just wanna kind of pay my respects to him on fight night as well.”

A saddened Frampton sent out several heartfelt messages on Twitter in the immediate aftermath of Gonzalez’s death. The two-division champion from Belfast called Gonzalez “one of the nicest guys I’ve shared a ring with,” and added that, “This kid gave me the fright of my life.”

Gonzalez and Frampton remained in touch through text messages after they left El Paso. Gonzalez wished Frampton luck before his career-defining fights last year against Scott Quigg and Santa Cruz.

The undefeated Frampton won both of those 12-round fights – by split decision against England’s Quigg (32-1-2, 24 KOs) on February 27 in Manchester, England, and by majority decision over Santa Cruz (32-1-1, 18 KOs) on July 30 at Barclays Center in Brooklyn. Those two victories led BoxingScene.com, ESPN.com and The Ring magazine to recognize Frampton with “Fighter of the Year” awards for 2016.

He lost a 10-round unanimous decision to France’s Karim Guerfi (25-3, 7 KOs, 1 NC) in his following fight, a November 2015 bout in Austin, Texas. Gonzalez’s next fight didn’t place until nearly a year later. He fought to a 12-round majority draw with Mexico’s Hector Bobadilla (9-14-1, 4 KOs) in that bout, October 29 in Guadalajara.

Though his heart hurts for Gonzalez’s family, Frampton remains appreciative of what Gonzalez did for him and his career, even if Gonzalez didn’t quite realize it at the time. Frampton took Gonzalez lightly and nearly paid a steep price for it.

A determined, opportunistic Gonzalez reminded Frampton of what it would take to accomplish his dreams, the type of feats he recorded during 2016, the best year of Frampton’s seven-year pro career.

“It made never think about overlooking an opponent,” Frampton said. “I kind of got very complacent going into that fight, thinking it was gonna be easy. That was a big mistake and I’ve learned from that. I think that fight was good for me because it made the Scott Quigg fight, it made the Leo Santa Cruz fight, because they thought they’d seen a vulnerability. I think that fight, for me, was a blessing in disguise.”