There’s nothing like a European Superfight. An arena or stadium packed to the hilt with fans from each fighter’s city or country cheering them on, and the stakes as high as they’ve ever been.

Carl Frampton has been there. In fact, he was just there in February, fighting fellow unbeaten Scott Quigg in a clash between Northern Ireland and England in front of 20,000 fans at Manchester Arena. The IBF and WBA super bantamweight titles were almost secondary to UK bragging rights, and when it was over, it was Belfast’s Frampton walking away with a decision win that was a lot more clear-cut than the official split decision verdict.

For some fighters, that would be the pinnacle of a career. For Frampton, he’s got to do it all over again on July 30 when he moves up to the featherweight division to face another unbeaten in Leo Santa Cruz at Barclays Center in Brooklyn. When it comes to the nuts and bolts of boxing, that’s no issue; it’s what guys like Frampton do. But what about the mental part of the fight game, having an emotional high, coming down, then doing it all over again?

Again, “The Jackal” has it covered. And if he has his way, it will be like this all the time.

“These are the big fights that attract me,” Frampton said. “It (getting up emotionally) may be different if it was a lesser name than Leo Santa Cruz, but when you’re boxing someone of his caliber, a three-weight world champion, it’s not hard to get up for the fight. This is the fight I’ve been after for quite a while now and there’s absolutely no problem for me getting up for it.”

The two were on track to meet in 2014 when both were at 122 pounds, but the fight never came off. Frampton always kept an eye on the current WBA champ though, feeling that they would eventually cross paths.

“I knew both of us being (Al) Haymon fighters, that the fight could always be made,” he said. “I kept a close eye on him and likewise as well, I think he kept a close eye on me. So I knew that it was inevitable at some point in my career because I was going to have to move up. It was getting tougher and tougher to make 122, so I’m enjoying boxing now again, and making 126 is much better for me. It’s a fight I’m looking forward to, and I really can’t wait for it.” 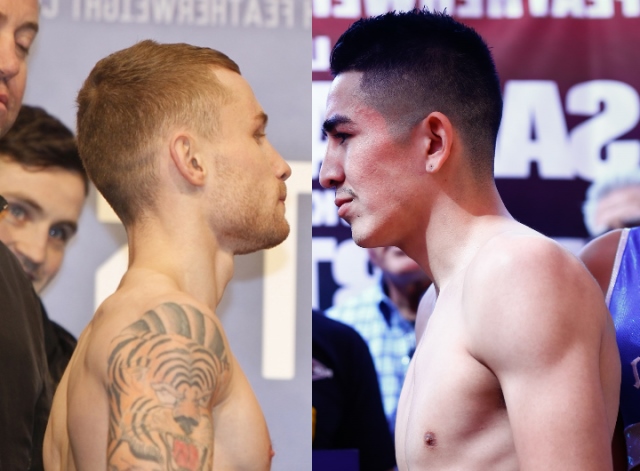 Fight fans feel the same way, as it’s one of those rare unbeaten champion vs. unbeaten champion matchups that are always compelling. And while naysayers may point to Frampton vs. Quigg being less than Gatti vs. Ward, the 29-year-old is the first to admit that the bout didn’t deliver on the hype.

“Coming off the back of the Quigg fight, it was a big fight that probably didn’t live up to expectations,” he said. “It wasn’t a great fight and wasn’t really fan friendly until maybe the last four or five rounds. But this fight with Santa Cruz, I think this is one that will live up to everything that people are talking about. It’s going to be a great fight and I think our styles will gel well and we’ll put on a good show.”

Yet while Frampton is brutally honest when assessing the biggest win of his career, in reality, he likely garnered even more fans for his disciplined effort when the pressure was at its highest. Many fighters would have been drawn into a brawl, but Frampton kept his cool and made a tough fight look easy.

“We had a game plan going into that fight and it could have been easy to get drawn into a war and stand and trade, and I could have won the fight that way, but I knew it was going to be easier for me to win the fight the way I did,” he said. “So I like to think of myself as a clever fighter, and I went in with true belief and trust in my coach, and he set up the game plan and I stuck to it. And to be honest, in the end, it was a comfortable win. I really didn’t have to get out of second gear. I felt fine all the way through the fight. He kind of upped his game a little bit in the second half, but I felt comfortable. It’s going to take a disciplined performance again to beat someone like Santa Cruz. I need to be switched on the whole time and that’s what I’ll do.”

He also needed to clear his head of any distractions, hence a training camp that has been finishing up in New York. Frampton has been welcomed by his temporary home, even having Carl Frampton Appreciation Day declared in Westchester County last week. So if Brooklyn looks like a mini-Belfast on July 30, don’t be surprised.

“I’ve done most of my camp in London, which is normal,” he said. “That’s where I train. Although I live in Belfast, I come away from my wife and three kids and do most of my camp in London. There are no distractions, really. I get recognized quite a lot when I’m at home in Belfast. London is okay, I can walk around. But I wanted to get out to New York early this time. The last time I fought in Texas (against Alejandro Gonzalez in July of 2015), I think we came out a little bit too late and I just wanted to get used to the temperature and the humidity. And create a bit of interest as well and hopefully sell a few tickets and start to make a name for myself out here on the east coast.”

If Frampton beats Santa Cruz, he will have a big name not just on the east coast, but throughout the boxing world. And from there, things certainly won’t slow down for him, as Wales’ IBF champion, Lee Selby, will be next on the hit list.

“Obviously, the Selby fight would be very appealing to people, especially back home – an All-British fight would be great and it would be another unification fight,” Frampton said. “That’s a fight that’s appealing to me. But to honest, I’m 29 years old, and I want every single fight for the rest of my career to be a big one. I want the public to be interested and I want it to get attention, both in my part of town and in the states as well. Santa Cruz is a tough fight, I’m not looking past him, but there are so many big fights for me at featherweight and I’m looking forward to the future. And once I beat this guy, people will really sit up and take notice of me, and it kind of pushes you close to top ten pound-for-pound in the world if you beat a guy like Santa Cruz. That would be a dream come true and there are a lot of options after this one.”

And it’s always nice to be a boxer with options.

Frampton has the skills but Leos size advantage will be too much come fight night.

Fuk Rig.! We ALL know he's good but if you threw a sht filled diaper in the ring he would go 12 rounds with it. He fights F type fighters like their boxing ELITES!!! He was on a PPV undercard…

I think Framps has a very good chance ever seen LSC when faced with movement? lol Can see the cogs turning in his head.